What I'm I'm Living For 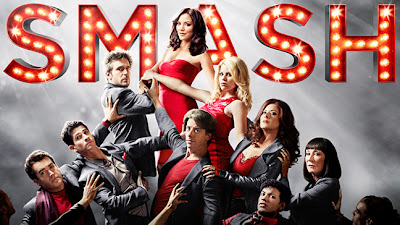 I have watched this show every week, even through the crappy early episodes and Debra Messing love scenes.  Anjelika Houston's awkward love match (sans chemistry) is the current awkwardness, but the rest is improving.  We do need a steamier love match for Kat McPhee.  If she could finally get it on with the director, the show could get somewhere.  The Republican hottie was fun while he lasted, but the writers were itching for a token multi-racial gay couple. Sometimes the show is good, something the solos make up for it.  One thing is for sure, Kat McPhee has never been better.

I reget to admit that 'Let Me Be Your Star' spent days in my head.

Unlike Glee, I can usually make it through most episodes without cringing.  I still think the tempo of the show would work better if it ended with a musical number.  Let's pray the show does well enough that they will send Marilyn to Broadway, as is the ultimate plan.  (They will then continuema with another musical, etc.  Kudos to NBC for thinking out of the box to save the flailing network.

Which have been your favorite numbers?  Are you watching?
Posted by OlympicEffect at 10:03 AM