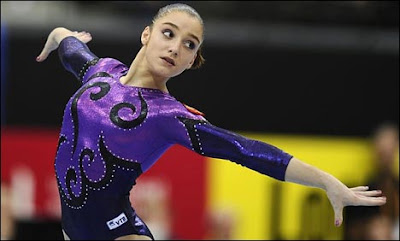 Rumor has it Aliya Mustafina decided against doing beam at the European Championships. While she is protecting her leg, one must will be strong enough to contend with Jordyn Wieber this summer. One has to give the edge to Wieber, Mustafina and Komova this summer given Douglas' inexperience and inconsistency at times. Competing in major AA finals gives these girls a major advantage, but it also makes them more aware at the pressure at hand.
Finnegan verifies beam at camp and one step closer to pushing a veteran off the team.

Horton gets his mojo back on floor after foot surgery/  A friend of mine recently worked an event where both Horton and Bross were paid to attend.  She was pleasant surpriused at how affable and comfortable Horton was answering questions in front of a crowd, while equally shocked as to how much of a wet blanket Bross despite having an agent.

Not surprisingly, Skate Canada is pushing for Joannie Rochette to make an Olympic return.  JoRo is still one of the top five ladies in the World and could definitely help the Canadians to earn a team medal...possibly gold. Rochette will train more intensely this summer to build for the Olympics.  After the Canadian suckfest at Nationals, JoRo will certainly be in Sochi.

Yu-Na Kim will cross dress while skating to Michael Buble's All of Me.  It looks like even All That Skate has turned to Scott Hamilton Cheese.

Catching up with Kyla Ross.

Posted by OlympicEffect at 8:05 AM