Gabby Douglas prepares for a successful summer at the April Training Camp.

Catching up with Bridget Sloan

The Russian Juniors won the European Championships today.  Maria Kharenkova leads the AA qualification despite errors on bars and beam.  I love how the Europeans have to alternate ridiculous formats and can't just have an AA every year, but there are always event finals.

Carol Heiss Jenkins was inducted into the NYU Athletics Hall of Fame.  It is unclear from Sarah Hughes' article if Carol ever graduated, or if she was only on the twelve-credit-a-year program like Sasha Cohen.  As always, it is wonderful that Sarah Hughes has friends her own age like Tenley and Carol. 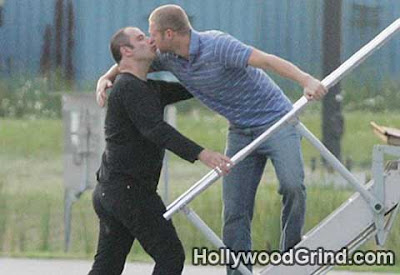 In gay news, John Travolta was outed for the seventeenth time.  This time, he harassed masseurs.  It won't stick because according to Margaret Thatcher, "He isn't cute anymore.  If he was cute, we'd admit he is lying."  Travolta previously was able to deny photos of himself kissing another man at an airport and that he had a special needs son.  Travolta allegedly issued shocking (but likely true) comments about how Hollywood is run.

John claims the second masseur is also lying.  Let's just be thankful that the insufferable Gloria Allred isn't involved in this case...yet.

Posted by OlympicEffect at 5:58 PM