I want Monica Phelps to look at me and tell me what I'm eating.
Posted by OlympicEffect at 7:37 PM 10 comments:

A Fluff to Remember

As if this night wouldn't be bad enough for Michelle Kwan, she and her fellow competitors were forced to be a part of this opening piece...back when skating actually mattered.

Which artistic shot is your favorite?
Posted by OlympicEffect at 8:58 AM 8 comments: 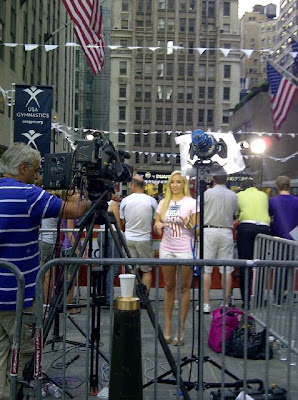 Nastia Liukin spoke to NBC affiliates around the country this morning for the one year til London kick-off. 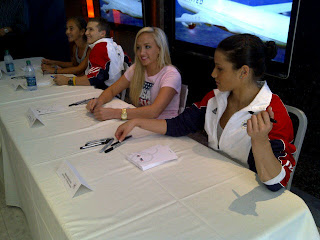 Members of Team USA pretended to like one another for an autograph session.

Visit msnbc.com for breaking news, world news, and news about the economy
Alicia, Horton and Jordyn were on Today this morning.  Alicia looks ferocious, despite appearing like she hasn't digested a meal since Worlds.  Kudos to NBC for showing every clip of her falling in Beijing.  Horton appeared slightly awkward as Natalie Morales fed him answers.  She even tried to show a little personality.  You know she is trying to knock off Ann Curry for the anchor position.  Jordyn Wieber appeared like a duller version of Carly Patterson.  In addition to plucking her eyebrows to deal with the stress, Jordyn likes pedicures.  Props to NBC for trying to make her sound like she has a semblance of personality---note her stank left big toe.  Wonderful camera work.

Visit msnbc.com for breaking news, world news, and news about the economy
Michael Phelps still hasn't used any of his millions for any sort of dental work.  We can only hope the gorgeous Ryan Lochte kicks his ass next summer.
Posted by OlympicEffect at 10:04 AM 29 comments:

After watching what has become of artistic gymnastics, I am in need of massive amounts of shock therapy.

Here is what I'm currently living for... 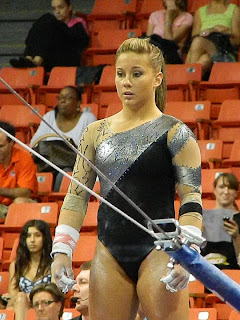 It is amazing to witness just how much the sport of gymnastics has deteriorated since ridding itself of the 10.00 system.  Six years ago, many of us whined and got a tad dramatic.  The thing is, we probably should've whined a bit harder.  Routines will always be judged and scores will be subjective, but the actual product of gymnastics has turned to absolute shit.  Before, form breaks would kill you.  If you looked like Chelle Stack on beam, there were consequences.  Now, Aly Raisman is rewarded for having shitty form because she makes up for it with monster difficulty scores.

How sad is it that fellow gymnastics bloggers were lauding Alicia Sacramone's floor routine as a work of baby Jesus?! Have the standards gotten so low that a little arm waving now constitutes moving choreography?  Twelve years ago, we all bitched at how disgusted Kristen Maloney was.  The scary part is, she looks like Mostepanova compared to ninety percent of the shit currently out there.  The majority of the field looked butch and beastly, like the 1988 team from the German Democratic Republic (only without their fabulous uneven bar technique.)  Luckily, there were a few bright spots and amusing moments to keep us from offing ourselves before the train wreck at VISA Championships in a month's time.

Kittens, it's been a while! Catty Comments here in the penthouse headquarters for the AJ San Francisco bureau. Since the warmups aren't televised (boo - it's called "Red Carpet" Universal Sports, and if you're not into it, it's called Bravo), I'm looking at quickhits on Gym Examiner, Gymnastike, and Couch Gymnast. The first victim of the red carpet is Shawn Johnson - gurl, no. That would get you auf-ed on Project Runway. Thanks to Couch Gymnast for that photo & Gymnastike for posting it. 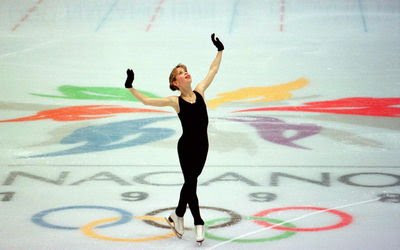 Catty Comments here to alert you to me, here, guest live blogging Covergurlie Classic this Saturday, 8pm ET/5pm PT. Universal Sports will be broadcasting live on TV and streaming.

Update: Blythe of Gymnastics Examiner is doing some fabulous quick hits of podium training this fine Friday, and will upload videos! She already has one up of Sacramone's dramatic fx choreo. 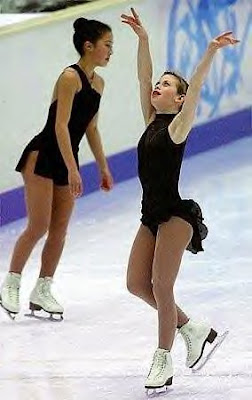 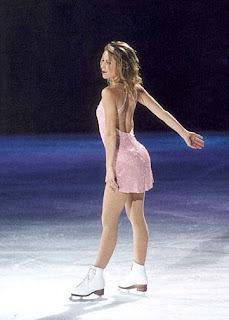 If you ask anyone in my life, they will tell you that I hated Tara Lipinski growing up.  As a young closeted boy, I had a pure love for Michelle Kwan.  Michelle was going to win the Olympics.  She was both an athlete and an artist.  Unfortunately, Tara Lipinski had other plans.
The tenacious Tara Lipinski remains one of the greatest competitors that the sport has ever seen.  My eleven-year-old self threw a remote control at the television set when Tara dethroned my personal skating savior.  I hated her because she was good.
Recently, I had a chance to chat with the charismatic Olympic Champion about her return to the skating world.  Tara Lipinski is currently commentating for Universal Sports and served as the Skating With The Stars correspondent for Inside Edition.  The Olympic Champion has also returned to the ice after six years away and still has some serious moves.  Her commentary has been met with wide acclaim and it appears that the figure skating world’s fiercest competitor and part-time villain has found her true niche.
In Part One of our interview, I was able to get a grip of how to prepare to compete with a butcher knife.  It is my hope to be landing triple loop+triple loops by the end of Part Two.  Miss Lipinski is candid, insightful and always full of personality.
Read more »
Posted by OlympicEffect at 12:38 PM 17 comments: