Catching up with Jordyn Wieber

Sexy Derek Hough and Maria Menounos were voted off DWTS after earning a perfect 30 this week. 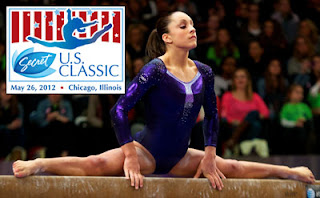 The Draw for the Secret US Classic.  Of course, not everyone will compete all events.  It is interesting that Maroney is starting on vault, Li starts on bars and Liukin and Bross start on beam.  It is presumed that Liukin will compete beam and train bars at Classics before doing both events at Nationals and Trials.  Sloan starts on floor.

Marvin Tran's citizenship has hit a snag.  Does anyone really think  the JSF won't get it settled with a potential team gold at stake in Sochi?  They are insane about winning.  I'm not remotely concerned about this remaining unresolved.  This is the token media campaign to get something done.

Akiko Suzuki is aiming for more.  Some people don't know that when they get their Paul Wylie miracle medal, it is time to turn professional.

Interview with Weaver and Poje

An article with Hugo Chouinard on creating skating music.

Mark Ballas and Katherine Jenkins (Injury and all!)

From the YAS Challenge:


Emily Tuttle is as Sarah Lawrence as possible reviewing the Young Artists showcase.  Watching her trying to be PC when one of the choreographers named Mark Ballas as their inspiration is one of life's true joys.

Emily's expression when discussing Bebe's choice of Firebird and Rob's choice of Bolero is extra pleasurable if you've ever had to deal with English majors at a liberal arts college.

And a great video from last week, the great Garrett Kling choreographed for the incomparable Jason Brown.  Garrett is my favorite contestant.

Posted by OlympicEffect at 9:47 AM