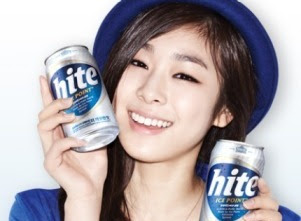 Doctors in South Korea are trying to get Yu-Na Kim's advertisements for Hite Beer and have blamed the advertisements for encouraging youth binge drinking.  I wasn't aware that Yu-Na Kim now endorsed beer, but I suddenly find her endlessly more entertaining and fascinating.  At 22-years-old, a little added edge could be good for her career as she transitions into full blown adulthood.

Yu-Na is obviously responsible for an increase in drunk Koreans singing Celine Dion at their nightly Karaoke sessions.  The world has had enough of their endless renditions of My Heart Will Go On.  Blame Yu-Na!

Shayla Worley and Noel Couch spoke to the press about the coaching change at Georgia.  There are a few BS quotes about the spirit of Georgia, but we did learn that the team learned the news on Friday afternoon, shortly before it was released.  The news was delivered two days into finals.

A great interview with gorgeous Massimo Scali about his career, coaching and the current state of ice dance.

Eliszabeth Seitz withdrew from the European Championships with a back injury.  With Tweddle and Seitz out, things may be so dire that there are two Romanians in bar finals at the European Championships.  Seitz isn't clean enough to win bars, but she is certainly a roadblock in event finals should anyone commit errors.  If the Russians don't go 1-2 on bars in Brussels, there will be problems at Round Lake.

Vanessa Crone and Nikolaj Sorenson have teamed up and are training in Montreal.  He previously represented Denamrk.

Elizabeth Price upgraded bars at camp.  (USAG is really letting these videos trickle in at a snail's pace.)  Then again, it has been sixteen years since they've won Olympic Gold, no sense in climaxing too early.

Posted by OlympicEffect at 10:24 AM