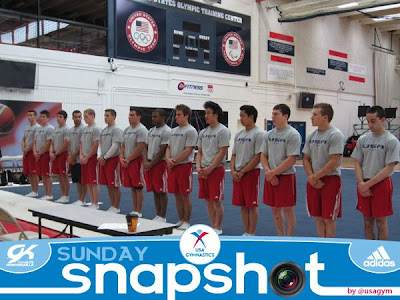 Line up at men's training camp.  Sadly, this photo and the men's team are a bit boring.  They just don't have the same Holocaust undertones to their training camps.


TV Version of My Body Is A Cage.

Hannah Whelan has to step up in the leadership role with Beth Tweddle missing Europeans.

Zhang and Zhang have officially split up.  She is retiring, while he is taking the Mark-Ladwig-old-whore approach and is starting over with Cheng Peng.

Lizzy LeDuc's two years of misery continue, as she fell three times during her bar routine at the elite qualifier, chose not to finish her routine and was only awarded a D-score of 1.8.  Lizzy started off well as a junior, moved to WOGA, had her technique changed (necessary) and then she struggled with injuries and being overshadowed in the gym.  It was not the most fitting gym switch as her technique was a mess before going Russian.  The naturally talented girl is one who I would say is at risk for quitting unless she has some more success.   Bars is just not her event and WGA's technique didn't help.

Stella Umeh will be inducted into the UCLA Hall of Fame.  Blessing to Stella!

TV Version of All of Me.

Yu-Na Kim's Someone Like You from Day 3 of All That Skate.  Do we think she's ever even had time for a boyfriend?

Evgeny Plushenko from Champions on Ice Italy and an updated on his work with Pasquale Carmerlengo.  I may not like his choreography or arm waving, but I certainly have studied his jump technique.  His toe loop technique is most helpful.

Carolina Kostner's 'Oh So Quiet' from Champions on Ice Italy. It isn't bad by today's exhibition standards, but Kristi Yamaguchi's was a million times better and was skated in a far better costume.


Yu-Na Kim's Someone Like You from Day 2.
Posted by OlympicEffect at 7:51 AM