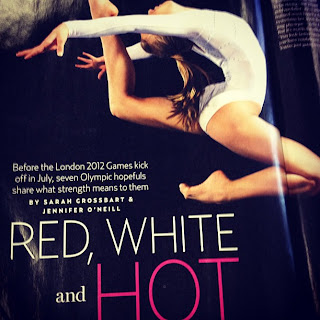 Nastia Liukin is feature in US Weekly's Hot Bodies of 2012

Anna Li will compete in the All-Around this weekend.  Most gymnasts only compete a few events at Classics.  In an Olympic year, it is important to start on a high and build one's confidence and reputation.  Gabby Douglas was only competing bars this weekend, but now she is set to compete all four events  It is a great opportunity for Gabby to hit a bar routine (after falling at camp) and move onto Nationals with a good outing under her belt on her most important event. It is risky if she makes mistakes and loses confidence before Nationals and Trials.  Better to get the kinks out now, but one doesn't want NBC replaying clips of all of her misses either.

Wieber and Sloan are expected to compete two events each.  Anna Li has been focused on making herself more relevant.  Typically, only people like Aly Raisman do AA at Classics in order to have a nominal win.  Then, Mihai will bitch that no one else is doing all events.  Last year, Chellsie Memmel made a statement and captured the attention of the meet despite finishing second.

Japan is planning a new Pro-Am for the fall focused on artistry.

Patrick Chan says he is prepared for Sochi and will have all of his falls out of his system.


Mykayla Skinner on floor at camp.

More of Shannon Miller's fabulous lifestyle.  She makes me want to be pregnant, just to be more like her.
Posted by OlympicEffect at 1:06 PM