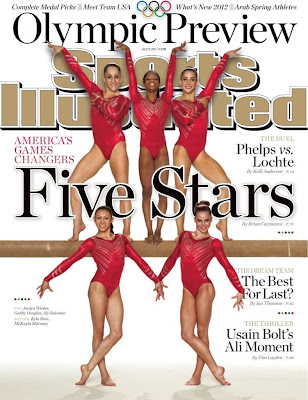 With months and even years of speculation and rapid cheering for our favorites, it goes without saying that much of us are rooting for an incredible competition from London. Russia, Romania, China, USA, Canada...we want to see the best gymnastics we ever have. While every media outlet is spewing things like, "Americans are set on nothing but gold," we have seen that Pre-Olympic hype 'doesn't mean shit.'

Shiva Rea and I were just getting in touch with our sacred strength and Namaste, but I wouldn't count on my red-blooded Polish-German fire coming through. It's go time. The coffee is on. The water is poured. The stretching has been done. And it is time for McKayla Maroney to stick her second Amanar of the year. I may have called out of work due to illness, but after witnessing NBC's primetime coverage...je suis malade.

All eyes will be on Lynn Raisman, as she truly is our greatest Olympian.

The American women are in sparkly red...my favorite. The Russians are in their acid trip warm ups and the Canadians are looking like usual.

Cata and Sandra have their game faces on and are marching with their three love children.

Team USA looks relaxed and happy...for Jordyn Wieber she really has nothing to lose. The Russian bitch faces are on. Afansyeva barely even cracks a hint of a smile. The Chinese women look scared...as they should be. I wouldn't want to return to China without a token bronze.

The Italianas are looking bellas and possibly waxed for the event.

"Gabby on all four events is making me breathe into a paper bag. The only thing that better fall is that weave."-Drunksana

Jordyn is ready to muscle this vault. Nails her vault! Confidence back! Veddy guuuud Jor-dahn.

He Kexin...no longer our baby Alien. Shannon doesn't get that it is pronounced Huh, Heee is doing very well. Dead hang pulled out...stuck dismount, chest down, but stuck!

He Kexin and Martha are constantly crying. Maroney nods knowing she deserves her score.

"Martha is going to shit her pants if this keeps up. Send the depends!"-Uschi Keszler

Tarasova's Mink is forcing us to ass switch to the BBC feed. Thank God we have an Asian around in times like these.

My life is no so much better without listening to Shannon Kwiatkowski.

My NBC feed might have had a higher resolution, but this BBC feed is so much easier on the nerves.

Will Mustafina do the Amanar or will Russioa concede the gold?

And she plans a DTY.

Can we skip the rest of beam and just go to vault? Sorry Japan, no one can offer the FIG enough cash to get you a silver in this meet. Unlike figure skating, you just showed the cash up front last night.

And Paseka proves to be a worthless bitch. At least Vika is warming up for AA domination. Her bars 'touch' was more useful.

Diana Chelaru...I can't pretend she is any good. I just cannot. Or Bulimar.

Iordache- she looks like the girls from Bucharest circa 1995. I'm shocked Belu doesn't hate her for her ability to swing and not look like a complete East German weightlifter. Not going to make her an AA contender without big errors from Gabby and the rest.

Victoria Moors...stuck double double. I am so over this trite music. It does nothing for me. 1 1/2 through to a triple. 2 1/2 twist. I love that message board nerds thought she could medal on floor. Double tuck dismount. Solid.

The judges are finally giving Romania scores they deserve on bars.

Komova's vault is reshown. That's what she needs to do on Thursday.

Dominique Pegg...sturdy 1 1/2, not spectacular, but solid.

I didn't even pretend to care during Rogers' average DTY. Looking at my numbers like Shannon Miller.

Um, go to bars. I don't care about Canada that much. They are nice to watch during rotation breaks, not the heat of the action.

I love that the British commentators let us know that it isn't their fault we aren't watching Russia right now. They don't care about Canada or Japan either.

Komova- fabulous swing. Gorgeous work. Deserves to be so much higher than the American girls. 1/2 pirouette higher than usual, but still a slight deduction. Stuck double double dismount with legs together. Fantastic.

15.233 for Mustafina...Jordyn better be strong today or they will pounce.

Ponor hits the switch ring this time. Sticks the double spin. Onodi+bhs+2 ft layout. Aerial+bhs+layout stepout. She is herself again after being useless in prelims. Strong, strong strong exercise.

The British commentator is calling gymnasts unsophisticated on floor. I'm in heaven.

U-S-A chants! Michael Buckley and Mary Lou Retton are leading them. Where is our icy reigning Olympic Champion?

"I'm pretty sure Japan's uniforms are the scraps from Lambiel's zebra suit."-Dedicated Reader

I never imagined Paint It Blank being up tempo and cutesy, but Jennifer Pinches seems to think so.

Jo Jo- And she is hesitating on the Wieler kips, but doesn't allow herself to fall. Toe on full to tkatchev. She is fighting. Small hop on full twisting disaster, but her inner Kim Zmeskal would not let disaster strike. Will the judges be harsh on the Wieler? After Russia's scores, they should...

"Wiebersaurus did her duty. I am proud of that slugger."-Uschi Keszler

"All of Italy's makeup looks like a server at Chick-fil-A. No gay helped.'-Dedicated Reader

"Ferrari is definitely the Suguri of gymnastics. That vault was like a stepped out double toe at the end of a long program."-Uschi Keszler

Kyla Ross hits her usual set and Maroney loves it.

Beth Zenyatta Tweddle- Out of bounds on the double arabian and the music picks up to celebrate. Forward on the dos santos. This is Beth on floor...we are not required to like her on this piece. She worked hard on this dance?! Uschi is dying and trotting in his room.

Little shaky for Iordache. Almost overcooks it, but doesn't.


It is time for Aly and Lynn Raisman in this rotation.

Kyla hits beam.
Gabby- stuck series. stuck back full. This is the best she has looked ever on beam. Nailing the combos. awful switch half but connects to a solid back tuck. Strong front pike with minimal knee bend. Step back on the double pike, but that's great for Gabby!

HQS- fell and out of bounds on floor.

China is opening the door wide open on floor and beam aside from Sui Lu.

15.233. It will be difficult for Russia to catch given how nervous they make us on beam.

Raisman is on beam and we aren't seeing it.

Seeing Kyla Ross' beam. I felt myself feeling bummed we weren't seeing Aly instead...that tells you how dull she is. It is all very correct and proper.

Apparently Mustafina is bobbling on beam, but hits. British commentators saying it was nothing too major.

Leave it to the Japanese to show us shitty vaults when Russia is on beam.

Komova- L turn+aerial+back tuck+sheep.  BHS+LOSO. Arabian, small wobble. Light in the leaps. Stuck punch front. Stuck side somi. Arm waive on the switch leap. WTF. It was at least .3.  Low and hops to the side on the double arabian. She cannot afford to do that on Thursday. The Russians are giving up. Komova looks dejected. The British commentator is saying she shouldn't be too dejected--that explains why Team GB cannot even dream of a medal.

Jordyn goes running past the Russians to intimidate them.

Christine Brennan is now referring to them as Mother Russia...God Bless.

Iordache- yurchenko double full...the foot is clearly giving her rpoblems. That was not a great vault.

Mustafina- Lovely double arabiabn+stag leap. 2 1/2+front layout full. OMG the BBC goes to news....load NBC, load!  OK, Mustafina still on floor and I picked up where I left off (magically), Gorgeous Memmel turn (they shouldn't name it after someone who is incapable of doing the skill), double tuck, Lacks the confidence of two years ago, but still a fantastic gymnast.  Messy triple full.

Messy DTY for Ponor. The one knee was clearly bent.

Grishina is being a total Czisny on floor.

Canada having the meet of their lives.

14.800 for Mustafina who is bawling. After Grishina's mistake, Komova grabbed her head and walked away bawling as well.

I love how unaware NBC is of anything that went on with Grishina.

Little bit of an issue?! Shannon is a bit slow. Maybe it is why she needed fifteen hand changes on a giant full.

Afanasyeva on floor. She never looks happy anyway,. Stuck double layout. Nailed triple full. Sirens blaring. The dance break is the truly fabulous part of this routine. This routine is so much better than anything we could dream of seeing in the states. OMG double pike to her knees and arms. Tears for Russia all around!

Wieber- Stuck double double, huge smile. Hit 1 1/2 through to triple full...leaves out the stag leap that kept her from AA finals, 2 1/2+leap, she has the leap of a girl who is about to win the Olympics, almost stumbles on a leap. Double pike, small hop. Great job! Waves to the crowd.

Raisman- Look at her pursing her lips now! Leaves out the front layout, bounced out of double arabian, smart.  Arabian Double Pike+leap.  Need. Lynn Cam. Triple Full! (if she goes another year, that may not get around), Double Pike_Leap. Gold and shy is crying as she finishes!!!!

Is Kyla finally crying about something?!

Komova cries, but waves. Kyla looks like she has been working on forcing tears.

They await the score in an adorable shot. 15.300 for Raisman.

He Kexin is wiping the tears of HQS.

Long wait for the victory ceremony. Where are Lynn Raisman and Martha?  How will Bela make this all about himself?

This commentator is out of his mind thinking the Russians will be happy with silver.

This ceremony is taking forever. It is only deepening the trauma for Mustafina.

Romanians quite pleased. Nice to see.

Russians putting on smiles for silver. They were too traumatized to go over the celebrating the Americans earlier.

Why aren't the American girls (or Romanians) in height order? Great to see Wieber so elated. None of the American girls are singing the anthem...my favorite Olympic moments are always when the athletes are so overjoyed they forget the words. Wieber sings a bit.

What were your favorite moments from finals? (Aside from Maroney's vault :) ) 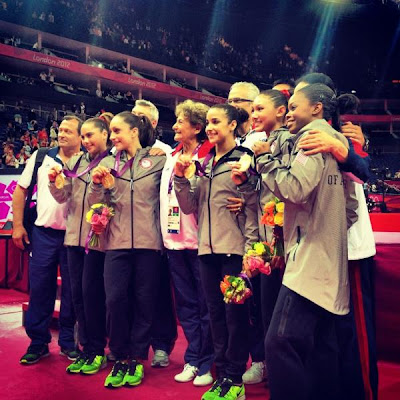