This and That: Bonus 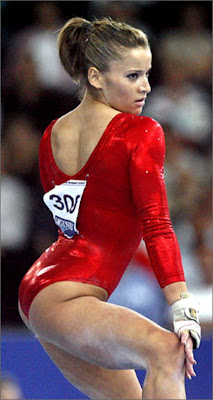 Alicia Sacramone is going for gold.

Great photos from All That Skate.
Danell's Leyva's high bar from camp.  (With a new release.)

Skate America 2012 will be held just outside of Seattle in Kent, Washington.

Tasha Schwikert Then and Now.

Lindsay Davis and Mark Ladwig team up.  Mark is 32-yeards-old. One has to question if they will ever attain unison before his body gives out.

Continuing with Gymnastike's series of innovative interview questions, Shannon Miller reflects on missing gold by .012 for the millionth time.  Frankly, her '94-'96 seasons would be much more interesting.  Hey Shannon, how about that stalker who was at '94 Nationals?  What about that wrist in '96?  The hamstring?  What about when Steve made you fly home from Worlds after compulsories and you were hammered for it?  IDK...something we'd actually like to hear about?!
Serena Williams' interview with Piers Morgan will air tonight.


Hayley Sananders committed to UGA.  She does have potential to be more of the Nikki Childs/Taylor Spears type of WOGette and less of the Tanella type.  She does have gorgeous execution that is rewarded in college, but she does have aspects of her gymnastics to work on.  Hopefully she will improve in college like Nikki Childs, Cassidy McComb, Kat Ding, etc.  UGA is really relying on hidden gems lately, as they aren't getting the big recruits.  It isn't a bad thing if they pan out, as injured former elites can be unreliable and week-to-week.  Hayley is someone KJ Kindler could get a lot out of.  Let's hope Jay has the same result, because Hayley has the potential to be really stable on bars and beam and go 9.850 in post season if she can continue to improve.  That is crucial for a team that has questions marks.  One never knows how sloppy but consistent Noel Couch will be judged each week or if Shayla will stay on the beam (or bars.)

Doug may be able to get her to do something on vault.  (Maybe.)

Floor is a possibility, but she needs to work on strength, power and conditioning. (Or Jay will just give her cheap passes and wonder why she doesn't go 9.900.)
The WOGA girls don't train on Friday afternoon, so Nastia and Ohashi are all glammed up for a photo shoot with GK Elite. 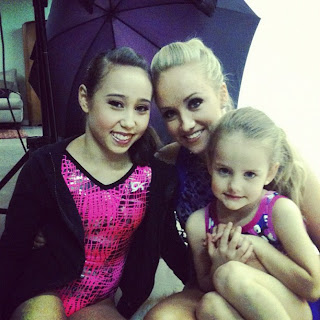 Posted by OlympicEffect at 10:29 AM