(I Need To) Smack Sasha Moment

The 2004 World Title was Sasha Cohen's for the taking. Already well trained due to her time with Tatiana Tarasova where she was forbidden to speak during lessons (because she was a known complainer), Sasha Cohen entered Dortmund with a great chance at gold given her pared down programs by Robin Wagner.
Even though she did not attempt the triple-triple combinations of Shizuka Arakawa, the judges found the overall technical merit of her spirals, footwork, marvelous forward scratch skin and immeasurable precision to be superior. In short, this was her year. After a sub-par performance from Kwan in qualifying followed by a .2 deduction for going over time, the door was finally open for Sasha to defeat the Kween and capture gold at Worlds. The judges went as far as to reward Cruella De Ville with four 6.0s for her fiery and bitchtastic performance to Malaguena.
Unfortunately for Sasha and her overzealous skating mother, Alexandra Pauline Cohen blew it. Again. The judges were on a high that year. Slutskaya was so awful that they didn't even need to pretend that the emperor had any clothes. In typical Sasha fashion, when the path to victory was without a bump in the road, she managed to create one herself. It was even evident that she was training full programs all season and she didn't splat during her long program, but it was a special performance with mistakes we'd never even seen from her before (and we thought we had seen it all after she skated into the boards and face planted a forward camel spin at Worlds.) Adorned in Badgley Mischka months before MK+O became their muses, it was truly her golden moment. Despite Arakawa landing two (questionable) triple-triples with her overarched (not locked out) ina bauer, it became clear if Ms. Cohen managed to stay upright, the judges were going to throw her a bone. They likely would've even overlooked a two foot or two (or three knowing Sasha.)
From the first strains of Robin Lake, it became quite clear that a stiff drink would be needed to get through the longest four minutes of all of our lives. For once, Sasha managed to change edge more on the landing of her triple flutz than she did on the takeoff. The second triple, a flip, was rather URRRRGGGGHHHHHH...OKAY! Girl's still upright. Then came that Russian jewish ferocity as the music picked up. The arms shot left and right like weapons. Then Uncle Dick had a skategasm when it came time for the Split Jump+Charlotte (on a flat). When Sasha made it through a triple toe+double toe and her posing section without stumbling we thought we had a shot. Triple Salchow is her best jump...she landed one already and she can do it. She can do it. She can....WHAT THE HELL?!?! A 2 1/4 salchow. Even Jill Trenary would've pulled that out. Of course, she hits the pared down footwork, marvelous spiral sequence on the music and her better than porn closing spins.
Fuck you Sasha, I swear I gained a few gray hairs even re-watching this on youtube.
And for even more reason the HATE her, she finally managed her only truly clean free skate just a few weeks later.
I need those years off my life back.
Posted by OlympicEffect at 8:02 AM No comments:

Baby Sasha was known for music choices that made our hearts sing. Sasha, skating to Celine, with the commentary of Dick, Peggy and Terry was beyond words.
While Sasha performed this program a few times, the choreography was never the same or as magical. Sasha's ADD and improved skating hindered the rawness of this skate. Even the mistakes are marvelous.
And even early on, Uncle Dick's gay heart went into overdrive and produced unforgettable moments in commentary history.
Dick: Now watch the way she does this Russian split jump. The fullness of the split! The height of it! And this double loo(p)...now watch the edge right there coming out of the jump.
She skates to the music. She also skates to more than just the music.
Terry: Meaning what Dick? (You know it wasn't the only time Mr. Gannon wanted to ask that question.)
Dick: That she adds more. She not only, she not only plays the music, she plays what's not there. Play what's there, but play what's not there.
Look at this. She gives this more than is required.
Peggy: A little shaky on that triple toe. She does. not. hit. a bad position. She is very finished off down to the pointed toe.
Dick: She has a presence that simply doesn't stop. The stretch! The line!
Sasha Mania!!! (Shortly followed by the coining of the Sasha Split, the Sasha Curl, The Sasha Spiral, The Sasha Skid and the Sasha Splat)
Posted by OlympicEffect at 7:57 AM No comments:

Posted by OlympicEffect at 7:13 PM No comments:

Kristi's seventeen hundredth perfect competitive program as a professional. While the other ladies were too busy not giving a shit, Kristi's Asian perfectionist work ethic went into overdrive.
Kristi + Yanni + Sandra Bezic = Total Win
How nice of Kristi to let someone else win in Lillehammer.
Posted by OlympicEffect at 7:53 AM 1 comment: 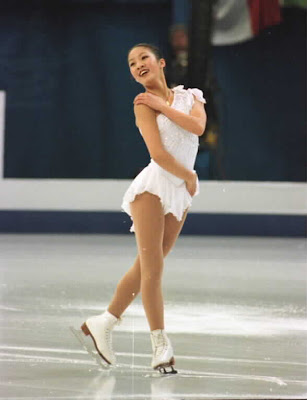 Download Link (Youtube mutes the music due to an irritating copyright claim.)
Alex Forrest and Margaret Thatcher have had the nerve to insult the Kwan to me lately. Alex Forrest will admit that she was absolutely brilliant for a number of years, but Margaret Thatcher has a blind hatred stemming from an ex boyfriend's undying worship of MK. She stirs up bad memories.
Well, I did not take these insults lying down. I whipped out at a weapon: the 1997 World Exhibition. That's right, the moment MK endeared herself forever to gays everywhere by skating to the music of Tori Amos.
I play to win. And this program is total win. (Though, SO glad she ditched Mare Talbot the next year.)
Wrongfully denied the World Title, Michelle set out in the exhibition to prove why she was the best and most beloved skater on planet Earth. Note the superior skating skills. The clean edges and speed. Tara Lipinski could only dream of relinquishing her two foot skating to develop such a mastery of skating skills.
Dedicated to a friend who had died, "Winter" opened Michelle's soul in a way we had never seen before. It demonstrated exactly how mature and soulful beyond her years she actually is.
There is something so private, yet so open and free about this performance. Skating without even the slightest tension, Michelle owns the subtleties of this music. While some people hate watching show skating, this a program with unreal technical merit. The artistic details are unmatched. Watch the positions, the arm movements and even the way Michelle turns her head.
"Winter" reminds me of why I fell in love with skating in the first place.
In the words of Margaret Thatcher, "Well of course Michelle was fucking brilliant and could do things that would make Sasha fall on her ass. Don't rub it in."
Posted by OlympicEffect at 7:42 PM No comments:

Today's moment of delusion is brought to you by Mary 'Hold that edge and be sexy' Scotvold and Nancy 'She's just gonna get out there and cry again' Kerrigan.
I've always adored watching sarcastic, brutally honest Nancy interact with the chain-smoking, scotch-drinking Scotvolds. In addition to "I want to die," at the 1993 Worlds, Nancy provided us with so many gems. Remember that Evy openly said "Nancy can be a real bitch," in Christine Brennan's "Inside Edge."
Their love/hate relationship was beyond entertaining, as Evy really is a brilliant technical coach. Mary, on the other hand, gave each skater the same program year after year. In Nancy's case, she hated classical music and often had cheesey muzak composed for her by Mary's brother in law.
Nancy's Kiss and Cry after the 1994 Olympic long program was charming because Evy and Nancy openly mock her hot mess of a camel spin that she almost fell on during the program. Nancy lost her edge temporarily and her leg dipped. I've always loved her honesty about that, as it is something that I would do (I'm never good at masking disappointment when I make mistakes performing or competing).
Alex Forrest alerted me that I've been missing a fabulously delusional exchange between Mary and Nancy all of these years. After Nancy's technical merit marks are posted, Mary illustrates exactly how delusional she was about her own choreography and the artistic impression of her skaters.
Mary: Do you think you'll get a six?
Nancy: I dunno.
Mary: I hope. I hope so.
Nancy: Yea man.
(Marks come up.)
Nancy (rolling her eyes): Nope. Never!
I die.
Posted by OlympicEffect at 7:45 AM No comments:

While he wasn't an IMG Client, Brian Boitano may have just been the most pimped out skater during the professional skating boom of the '90s. In recent years, we've learned that Mr. Boitano has quite the self-deprecating sense of humor and it has made it quite charming, but the Brian Boitano of the '90s took life (and made for TV competitions) very seriously.
Cue opera ballad sung by boyfriend. Inhale. Raise arm over head. Look intense. Back three turn. Bend over and stick out giant ass. Attempt to not be clumsy while attempting compulsory figures mid program.
Oh, Boitano programs at the World Pros were like no other. Landover was Brian's house and every year he delivered new levels of seriousness for that silver platter. With powerful buns that my mother adored and big Polish-esque thighs, the 1988 Olympic Gold Medalist powered around the rink before a spread eagle into Tano lutz, triple axel, triple flip, camel spin, weak sit spin, HUGE death drop and almost-blurred scratch spin! All to the commentary of Sandra Bezic marveling at a program she created.
While the total power bottom is an amazing skater and obviously a fantastic competitor, it wasn't enough for Scott Hamilton, the king of professional commentary. Whether it was out of unrequited lust or a desire to make the one time he defeated Boitano and actually "won" a pro competition a much bigger deal than it actually was, Scott liked to YELLL about what a truly amazing alpha male Brian actually is.
At 1995 Ice Wars: The Rematch, Scott delivered one of his most memorable (and curious) commentating performances while watching Boitano compete his overwrought artistic program to Seal's "Don't Cry."
"He's so strong. He could do this program with his arms and legs tied behind his back at 3 AM, with the lights off, bound and gagged."
Mind you, until Kurt Browning started schooling Boitano at the World Pros (and boy was it heaven), every Boitano program was exactly the same as the last, so he had a ton of practice and his muscle memory likely would've helped him through skating in the dark while tied up like a hostage on The Young and The Restless.
I don't know what I miss more about pro skating: Scott Hamilton pretending that Roz Sumners' (oft-popped) double axel was an amazing human feat or all of society being forced to pretend that Katarina Witt and Brian Boitano were involved in some sort of torrid love affair. Don't scoff over that silver lame shirt he wore, you know it was the wardrobe of super heros!
It wasn't until an ass kicking by Browning and South Park spoofing his professional persona that we actually got a glimpse at the real Brian Boitano. Sadly, it was only a decade too late.
Posted by OlympicEffect at 4:00 PM No comments: