Welcome To My World: A Review 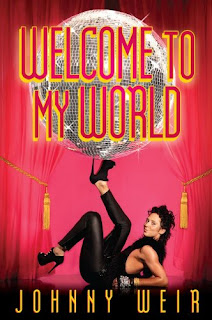 As a skating fan, I've long been an admirer of Johnny Weir's stunning positions and graceful movement across the ice.  I find him entertaining, interesting and of course, insanely frustrating.  There have been periods during his career where I've gone from being outraged on his behalf, to wanting to smack him across the face the way a good mother would.  Throughout his career, I have loved him when he has been serious and hard-working.  That success tends to lead to acclaim, which leads Johnny to become a bit of undesirable fame monster.  At the root of Johnny, I find him to be good, though incredibly contradictory.

I wasn't sure what to expect when I began Welcome To My World.  The cover is suggestive of his new, Tara Modlin universe that is often sorely lacking in substance.  Over the course of the few conversations I've had with Johnny, I learned that he had been planning a book long before the Olympics.  He has long had a story to tell and the Olympics gave his profile the necessary boost to attain the book deal.

On its surface, Welcome To My World does not appear to have the salience of My Sergei or other great autobiographies.  While one shouldn't necessarily judge a book by its cover, they can certainly judge it by its font.  Johnny's memoir is written in the same large font as previous ghost-written memories by Tara Lipinski and Michelle Kwan.  The font is not as large as in Sasha Cohen: Fire On Ice.

When reading for a review, it is generally not a great sign if I start making lots of notes.  The book is certainly starts off a bit iffy with a prologue filled with name dropping, seemingly written by more of the fame-whore Johnny than the inner sensitive artistic spirit.  The name-dropping is a mix of earnest appreciation and distasteful braggadocio.

Early chapters in the book open with Johnny's upbringing and Patti's parenting.  Johnny was allowed to sit at the edge of the bath tub and put on makeup while Patti readied for a night out.  Their relationship is endearing, if somewhat curious.  He does admit that he looks just like her.  The book does discuss the Weir family's decision to move to Delaware for Johnny's skating not long after having just moved for his equestrian training.  It becomes clear that for better or worse, the Weirs are a different breed.

The narrative begins to improve as his skating career takes off.  While the media may focus on Johnny finally admitting the obvious, a far bigger revelation is his admittance of feigning illness during the 2002 Grand Prix Series after a fight with the federation over his short program costume choice and hairstyle.  He also admits that the first time he put his hand on his pack at 2003 Nationals (after hitting the boards) was acting, but he wound up injuring himself on his second triple axel after being woefully unprepared.

Johnny's fights with the federation drive much of the story.  While Johnny desired success, he certainly didn't attempt to curtail his in-your-face-attitude, especially as his public status grew.  There are times when one may find the federation's access intolerable and egregious, but then one needs to question his actions when considering the long standoff existing between both parties.

Evan Lysacek is not trashed nearly as much as one might anticipate when opening the book.  While he is portrayed as a vapid lackey of the federation, Johnny does not spend much print discussing their relationship or rivalry.  His book is more reflective and internally focused.  That said, Johnny's biggest jab is a glorious hoot and unexpected whopper:

The book captures the best of Johnny's descriptive language and natural charm.  His relationship with "Alex" is written in a way that brings the reader back to their own young love and first gay experiences. It does not drive the narrative.

The second half of the memoir is driven by the force of nature known as Galina Zmievskaya.  Her hilarious, complicated, stern-yet-loving nature is captured brilliantly and is the highlight of the book.  The anecdotes included will amuse even the most jaded of skaters and aficionados.

As a book, it is a far better read than Tessa and Scott and far more satisfying and worth your dollar.  The book cover alone serves as a wonderful ice breaker should you ever hold a soiree in your apartment and need a perfect book to adorn your coffee table.

The book is stereotypical of many things Johnny: it leaves you wanting more: more insight, more details, more unanswered questions.  There are six month periods skipped over at random points.  His second national title is barely discussed.  One will want to know as much about Tarasova as was written about Galina, but it just isn't given.  The overall candor of the book and charm outweighs any urges of slapping Johnny or wondering what could've been.

A-/B+ (The academic equivalent of the world bronze medal.)
Posted by OlympicEffect at 2:29 PM