US Nationals Preview: The Ladies 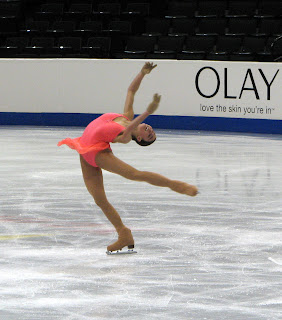 For years, the American ladies were the strongest team of any in skating (perhaps rivaled only by the Russian pairs.)  While the legacy of the American ladies may be firmly in the past, the contest at Nationals remains one of the most disputed and intriguing.  There are competitors, stars on the rise, and past starlets desperately trying to hold on to a formidable place in the sport.


Rachael Flatt is the reigning champion.  She may be the least popular gold medalist in ladies skating since Trixie Schuba.  Simply put, her skating fails to inspire.  People like Scott Hamilton have repeatedly told Rachael that she has a charming personality.  It has created a monster where this apparently cocky-over-nothing skater performs a bile-rising Betty-Boop-like persona during her long program.  Her new short program to East of Eden will also be a migraine-in-the-making for anyone with class, taste or a memory. Kwan owned that music with her flow, charisma and speed: three things Flatt is sorely lacking.  Rachael "The Rock" lauds herself for being consistent, but she is also known to get at least 1-2 downgrades per long program.  We can only hope she attempts a Triple Lutz+Triple Loop like she's droned on and on about, as almost no one ever is credited for that combination under the IJS.


Mirai Nagasu stole the show at Nationals last year, but an off-season stress fracture hindered her performance during the Grand Prix.  Mirai is known for being inconsistent at times and needs Frank Carroll's disciplined approach to training in order to get her triples around.  It will have been about two months since Mirai last competed by the time she takes the ice in Greensboro.  It she has enough time to get fit and prepared, look for Mirai to earn a trip to Worlds.


Alissa Czisny has been the surprise of the 2010-2011 season, but a rocky exhibition skate at the Detroit Skating Club sendoff has many wondering if she can hold it together and earn a title that she deserves.  Czisny is finally putting it all together and we can only pray that she is actually 'for real.'  As long as she puts together as many triples as she did in 2009, we can hope that the USFSA judges will prop her up and send her to Tokyo.  All of the American ladies have the ability to medal or implode; the ones we send might as well look attractive while doing it.


Ashley Wagner's day in the sun is quickly becoming a thing of the past.  Her over-processed skating was designed to mask her inner Jana Bieger/Claudia Leistner, but it just doesn't gel.  Ashley's New Year's resolution is to land her jumps on one foot.  It is an appropriate girl, for the chronic two-footer and underrotater.  For the sake of the future of ladies skating, fans should hope she doesn't take one of the top two steps on the rostrum.  She is quickly becoming another Tonia Kwiatkowski.  The most interesting thing about Ashley remains her bitchy streak that makes itself known whenever she fails to win gold.


Agnes Zawadzki was one of the top skaters on 2010, but nerves got in the way of success at both of her Grand Prix during her free skates.  Agnes is one of the sport's best jumpers and she is the type of skater who desperately needs to land her jumps to be competitive.  Skating skills, speed and presentation are not her strengths.  When Agnes lands her jumps, her performance is greatly improved.  A recent Ice Network article indicates that she is focusing on mental toughness and additional run-throughs.  Expect Agnes to at least earn a second trip to Junior Worlds.


Christina Gao is another skater expected to make Junior Worlds, but she is going through a growth spurt this season that is emphasizing the awkwardness experienced during that stage in one's teenage years.  When she skates, it appears that Christina now has five arms and four legs.  There are just limbs everywhere!  It is taking a while for her jumps to adjust to the change.  David Wilson has packaged her as a Mini-Yuna, but it is time for Christina to really find her own voice on the ice.  A rough short program at the Junior Grand Prix Final kept her off the podium, but she has had an overall consistent year.  It is time for her to break out of the 'medalist' category and go for this win.  Christina needs to emerge from Greensboro as a skater capable of standing out on her own.


Vanessa Lam is another burst of fresh air coming to Nationals.  After a win at JGP Ostrava and Sectionals, Vanessa is expected to skate well.  At 15 going on 16, Vanessa is growing and maturing on the ice.  Her skating skills, power and speed are up to standard, but the height on her jumps (especially the Lutz) needs work.  Watch to see if Vanessa can continue to handle the pressure.  Competing at Nationals is a bitch like no other.


Yasmin Siraj is the youngest competitor in the Senior Ladies.  It may be a bit of a stretch for the Bostonian, but a solid skate should keep her in contention for Junior Worlds.  Her jumps are usually consistent, but her skating skills are not up to senior standards.  Yasmin is still working out her awkwardness on the ice, but has made great progress this season.


Kristiene Gong had a strong Junior Grand Prix season and is another one to watch, especially for Junior Worlds.


One never knows when we will see the final performance of Caroline Zhang.  The former starlet is fading fast, but she did attempt to correct aspects of her nefarious technique over the summer.  Unfortunately, she didn't stick with Tammy Gabill long enough to work through the tough days.  Zhang is quickly becoming a sad case of 'what might have been.'


Like Caroline Zhang, Alexe Gilles also had no business competing on the Grand Prix this season (or last.)  Can she shave her failing career?

The stocks of these skaters are rising and falling.  Who will emerge victorious?
Posted by OlympicEffect at 8:14 PM