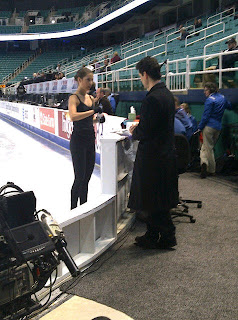 Alissa Czisny is in Greensboro and just took the practice ice for the first time.

An article (with video) about the muscle spasms Ashley Wagner suffered this season and her plans for the future.

Christina Gao was the first to skate a run-through during her practice today: Triple Flip+Triple Toe (fell out, not enough speed), Triple Salchow, Skated through Triple Lutz and just marked it (not warmed up yet), Triple Loop, Double Axel, Triple Flip, Triple Toe+Double Toe.

Ugh.  Rachael Flatt managed to land everything yet again in practice.  She is going to be tough to keep off of the World Team, which means we'll probably be stuck with her for yet another season:
Double Axel+Triple Toe, Triple Lutz+Double Toe, Triple Flip, Triple Lutz, Triple Flip+Double Toe+Double Loop, Triple Loop, Triple Salchow.  Thanks to this vomitorious girl, we only have two spots at Worlds and her ass will probably nab one of them.

Posted by OlympicEffect at 4:17 PM