US Nationals Preview: The Men 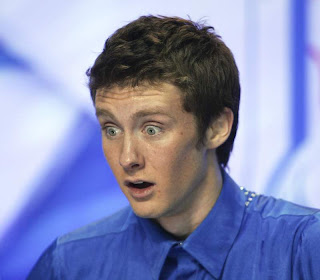 The men's event at US Nationals may prove to be one of the most competitive in years.  A year ago, the battle for the Olympic Team was all but decided.  It would've taken an idiot not to decide that the team would be Lysacek, Abbott and Weir and do everything in their power to make sure the results of the event made that happen.  With Weir and Lysacek now skating professionally, it is a year where every skater needs to do their best to take command of the men's field and declare themselves the dominant skater of the next four years.

Nationals is a tricky event.  Dick Button always points out that 'the National Championships is the toughest championship.  It is against your peers and everyone is nipping at your heels.'  It is an event full of politics, back-biting, pressure and snide bitchiness among fellow competitors, coaches and uptight egotistical judges.  Tim Goebel once described competing at Nationals to me as 'being stabbed in the gut for a week straight and fake smiling about it.'  This year, Frank Carroll does not have a top student in the men's event.  The top coach in American skating typically has his training regimen and the judges on his side, but he is not a brute force this season.

Each of the competitors has strengths and weakness that will be put on display:

Jeremy Abbott, the two-time reigning National Champion, is the most complete skater in the country.  At his best, he is one of the top three skaters in the World.  Jeremy has superb jumps, outstanding edges, refined skating skills and impressive artistry.  He is learning to tell stories with his programs.  Being a top international skater for the last two years, Jeremy's confidence is growing after being away from Tom Z's aura of negativity and participating in the world's top ice shows.  He is a fan favorite around the world and it is impossible to deny his talent.  Jeremy provided one of the greatest performances ever seen at Nationals a year ago.  When he hits, he routinely wins competitions.  This season, it is important that he doesn't peak too early, but it is very important that he skates well and restores the federation's faith in him.  Any federation would be iffy given his track record.  Earlier this season, Jeremy Abbott skated fabulously at the NHK Trophy.  If he can add a quad and not pop his second triple axel, his Life Is Beautiful program will be impossible to beat on home soil.  Having boot problems, he did not qualify for the Grand Prix Final.  He has had time to regroup and sort out his issues, but an uneven performance at a recent Detroit Showcase has skating fans unsure of what to expect next weekend.  Yuka Sato says she trusts him more as a competitor now.  Let's how that her trust is well-placed.


Adam Rippon is the most consistent skater among the top men.  He is adamant about improving his triple axels and adding a quad toe to his long program.  Among the top men, Rippon's skating is the most old school and a bit reminiscent of Johnny Weir.  Like Abbott, Rippon is well-balanced.  His strengths are obvious: line, artistry, spins, inventive jumps and consistency.  Unfortunately, Rippon would be labeled a ''ladies skater'' by late '90s and early '00s standards due to his smaller jumps, lack of power and inconsistency with his triple axel.  Adam routinely lands triple-triple combinations, but his triple toe on the back end of the combinations is small and has been deemed underrotated throughout the Grand Prix. Adam began the season in fine form by defeating everyone at the Japan Open.  Hopefully, it was not his peak performance of the year.  Known for peaking at the end of the season, Rippon has struggled at the last two National Championships.  The pressure may have gotten to him last season at Nationals, but he did dominate the Junior National Championships when expected to win in 2008.  Adam's footwork could hurt him, as the judges have a knack for only giving him level 2s.  Given the strength of the field, everything could come into play next week.


Brandom Mroz is the next 'great straight hope' of the USFSA and that could help his marks at Nationals. Sandra Bezic is helping him to improve his performance ability, but she cannot work miracles with him overnight.  'One The Waterfront' is an improvement, but he has a long way to go.  It is widely expected that Mroz will finish in the top three and earn a trip to the World Championships.  He is the most consistent US skater when it comes to landing quads and that should help him.  Americans judges get into the masculinity BS due to being self-haters and that should help him.  What doesn't shine through with Brandon is a 'love for skating,' which has even been questioned in recent years.  Brandon has even been known to turn down offers to perform (and be paid to skate) in shows due to not having true exhibition numbers.  Like most of Tom Z's table, he is slow as hell and can be very consistent. Mroz and Abbott were rivals when they trained together, so their head-to-head battle should help to make Greensboro a most memorable event.


Ryan Bradley enters Nationals as a dark horse and a sentimental favorite.  A year ago, the free skate of his life failed to vault Bradley onto the Olympic Team.  Few expected him to ever make it, as his weak competitive track record, inconsistent triple axel, lack of speed and poor skating skills have held him down for years.  He has long been labeled a 'show skater' and perhaps not taken seriously enough by judges or competitors.  Ryan seems to have found his niche in show skating, but he is back due to the requests of his fans.  Will it be another exercise in torture?  It is impossible not to root for Ryan.  His exuberance and personality are infectious.  Everybody loves him as a person.  I wish him the absolute best, but it would be tough for me to endorse him competing at Four Continents or Worlds due to his poor track record and lack of a future.  Other skaters need the experience more.


Armin Mahbanoozadeh, the Persian Prince, is someone everyone has taken notice of after his breakout performances at Nebelhorn and Skate America.  After teaming up with Priscilla Hill, Armin's already solid skating skills and jumps have improved leaps and bounds.  He is also reminiscent of Weir due to Priscilla's technique.  Many are hoping for him to pull off a trip to the World Championships, but it may be a tall order.  He will need to skate well, but there is still the feeling that the team will be Abbott-Rippon-Mroz.  If Mahbanoozadeh can have another great skate, he may upset the preordained notion of these championships.  His only weaknesses are a lack of a quad and a slight lack of power and speed due to his slight stature.  The Triple Axel has tripped him up from time to time, but it has improved in his time with Priscilla Hill.  Armin is a skater the fans are rooting for and we can all hope he brings another dose of magic to Nationals.  His 'Avatar' program is truly something great.


If there is a spoiler in Greensboro, it could likely be Richard Dornbush.  His jumps and consistency are something to behold, while he also has good speed and spins.  Richard needs a bit better programs, but his is clearly on the rise after dominating the Junior Grand Prix Final by 33 points.  In fact, his total at the JGPF was better than Armin's medal-winning effort at Skate America.
Posted by OlympicEffect at 1:15 PM