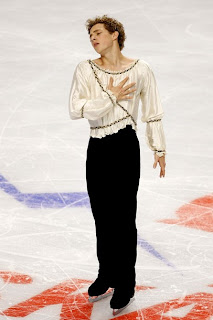 The Gators posted a practice update where they talked about staying in their own bubble.  That could explain why their performance was a bit flat.  Macko seems a bit delusional thinking that she is going to come back to elite, which is why she is reticent to call NCAA more fun.  Marissa King's voice is an utter delight to listen to. She seems like she may be the brightest on the team based on the interviews conducted each week. I always love how gymnasts explain away meets to us, as though we can't figure it out. Thank you to Macko for explaining the differences between home and away meets.  She seems like a real genius.  It will be another week until the Gators really face stiff competition.

Sasha Cohen's Stars On Ice Webcast.  It looks like they're trying anything to keep her interested in touring. Sasha has an expressed an interest in become a TV hostess despite sounding like she has a mouthful of marbles.

Jonathan Cassar practiced his short and landed: Triple Lutz+Triple Toe, Ina Bauer+Double Axel, Triple Loop.  A decade ago, that jump content would label him a 'ladies skater.'  His spread eagles make up for any lack of technical content.

Keegan Messing showed some huge Triple Axels and Quad Toes.  He tweaked his ankle this morning, but appeared fine during his afternoon practice.