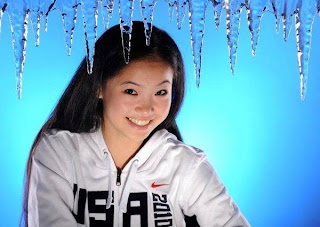 Caroline Zhang has changed coaches and left Tammy Gambill after working with her for about eight months.  Tammy Gambill is the coach who really displayed the most improvement in eliminating Caroline's mule-kick technique.  Caroline was not showing any improvement on her double axel entrance or her overall speed.  Gambill is known for being a disciplinarian, while Caroline is known for being headstrong.

Whenever Caroline enters a new season or switches coaches, she talks a good game in terms of improving her overall speed and her jump technique.  It never materializes, but there were glimpses of improvement during her depressing run on the Grand Prix this fall.  It is unspoken that Zhang has gone through enormous physical changes over the last four years.  While she started out as a waif, it was hoped that her speed would improve as she grew taller and matured.  The maturation and growth spurt took place in earnest, but the improvements to her jumps and speed did not.  Skating with speed is as mental as it is physical and Caroline's jump technique remained largely unchanged since her days in pre-juvenile competition.

At this point, any coach would be understandably reluctant to take on Caroline Zhang.  As the years go on, she is quickly descending to 'whatever happened to...?' status.

Peter Oppegard is currently coaching Caroline Zhang.  He already has his hands full coaching the international celebrity known as Yu-Na Kim.  Correcting Caroline's technique and dealing with her is a full-ti job and requires a Herculean effort.  Caroline trained at the East West Ice Palace for years and skated a few sessions a week there while training with Tammy Gambill.

Caroline is at a point in her career where the reality is that any coach is a mere figure head.  Like Sasha Cohen, it is clear that Caroline and her mother run the show.
Posted by OlympicEffect at 12:09 PM