Sam Peszek's "In The Huddle."

Courtney Hicks won Junior Ladies by a mile despite falling on her Triple Lutz.  Hicks is apparently a giant diva who went coachless for a time.  She certainly has a personality to keep us interested.  Hicks has great jumps, but needs Nicks to work with her on refinement, especially when it comes to her posture, step sequences and camel position.  The potential is obvious.  She has brilliant jumps and some amazing spins.  Her Biellmann does need to go.  Lauren Dinh placed second and Katarina Kulegeyko finished third after a rather gross skate.  She even skated through her first jumping pass.  Nina Jiang continued to struggle, as she has for most of this season.  Popped jumps and a fall on a Triple Flip killed her.  Mary Beth Marley also struggled with her jumps.  Her packaging is just a bit off, but it remains most curious that Philip Mills, a choreographer without a skating background, is her singles coach.  Mary Beth does work with John Nicks in pairs.  She is perfect for pairs, as her skating lacks the style, artistry and excitement necessary to stand out at the senior level.  There is a Caydee Denney quality about her that has me think "pairs skater" whenever she strokes around.  Mary Beth is built to land throws.

Kat Ding sprained her foot and will be out for three weeks.  Her frustrating season continues.  It will take longer for her to get back on vault, but they definitely could use her during the post season.


Video from practice at US Nationals.  Parker Pennington and Jason Wong skated in this group. 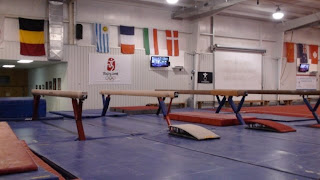 USA Gymnastics announced that the Ranch is now an official Olympic Training Site.  Um, because it wasn't before?  Basically all it means is a press conference and added funding from the USOC and sponsors.  It'll mean a few bonus checks for key people and they'll now hold Level 9 and 10 camps there in the summers, as they try to groom talent earlier.  It'll also mean more fund raisers like TOPS and they will bring in Trampoline and Tumbling, which no one in this country gives a shit about.  It was a bit curious that they didn't have Shawn and Nastia go there for the media today, but perhaps they don't want them in the line of sight until they're back in better shape.  Both will be at camp later this week/next week.


Note all the coaches saying how happy they are to be at the Ranch.

Gymnastike was among the press invited, as they lack any discerning brain cells.

Question of the Day: Why is Tatiana Perskaia National Staff on bars?  Um, Ashley Postell?  It isn't as though the Soviets were known for being great bar workers.  Oksana Omeilianchik was never exactly a genius on that event.  Why not put Perskaia on floor or beam, where she'd actually be useful?  Next they'll be having Tatiana teach seminars on how to pace athletes to peak at the Olympics.


Raisman on beam.  Note how Mihai's girls always throw combos on beam that they will never connect under intense pressure.  Ever seen Alicia hit all of her planned combos?  Even in training?  Why is Aly Raisman connecting skills to her switch 1/2 when she is extremely lucky she gets credited for it?