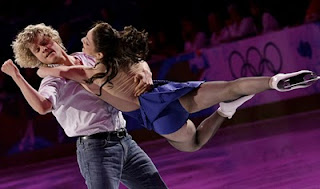 Ice Dance appears to the most predictable event at US Nationals, but that does not mean that the level of skating is weak this season.  Given the absence of Samuelson and Bates, it looks like both the Shibutanis and Chock and Zuerlein will be tough competition for the Olympians by next season.  The depth of United State ice dance remains difficult to comprehend for any long-time followers of the sport.


Marlie have changed part of their free dance yet again, but they appear to be working through this clusterfuck of a season and working to take their skating to the next level.  The tango continues to be a challenge for them, as they lack sexual heat between them, but they haven't given up.  While their free dance is far from their best program, the strength of their elements should carry them to gold medals at Nationals, Four Continents and Worlds.  It is important that they show improved expression and chemistry at Nationals in order to keep the buzz going for the most improbable of World Titles for the USofA.


The Shibutanis and Chock and Zuerlein are fighting neck-and-neck for the silver medal.  Chock and Zuerlein finished just behind the siblings in the Grand Prix standings, but the result is far from pre-ordained.  The Shibutanis have yet to skate a clean short dance this season.  Should they err again, the competition will be extremely close.  Their free dance remains one of this season's true gems.


Chock and Zuerlein have made incredible strides this season and Greg is showing much improved expression.  He is finally selling the crap out of his programs and it is working for the team.  Perception has Chock and Zuerlein finishing in third at Nationals, but they are certainly capable of challenging their training mates.  Tanith Belbin has repeatedly declared that she 'rediscovered' them this season.


Lynn and Logan look ready to grab the pewter medal over the Hubbells.  It is a changing of the guard, but not one that many are crying over.  The Hubbells have always been a cringe-worthy sibling duo, with her being far too flirty and scantily-dressed for someone skating with her brother.

Tanith will be sorely missed.  (And Ben too.)
Posted by OlympicEffect at 7:35 PM

Labels: Chock and Zuerlein, Lynn and Logan, Marlie, The Hubbells, The Shibutanis, The Wonderful World of Ice Dance, US Nationals