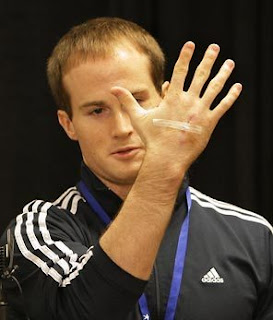 Paul Hamm recently announced that he broke a rib in October.  Well that quasi-Olympic Champion now has a torn labrum in his right shoulder and will have surgery this meet.  Paul had been hoping to return at next month's Winter Cup, but this understandably knocks him out.  He understands that he may be able to compete at Nationals this summer, but still plans on competing in London.  The thing is, with his freak accident breaking his hand at 2008 Nationals and still tearing his shoulder right before the 2008 Olympics, it looks like his body is telling him to hang it up.  There is a fine line when comebacks go from exciting and worthwhile to Blaine Wilson in 2008 and pathetic.
Posted by OlympicEffect at 7:16 PM