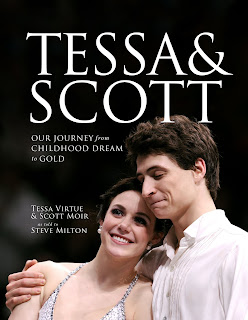 In case you didn't ask Santa for Tessa Virtue and Scott Moir's autobiography, I took the liberty of reading the literary masterpiece so you don't have to.  Unless you're looking for loads of glossy photos to line your walls with, there is little reason to actually purchase the book.  Frankly, you could probably go to your local library, read the book in under 90 minutes and still have time to photocopy a few of your favorite photos included in the book.

Tessa and Scott weren't sure they had a compelling story before they met with Steve Milton and actually worked on the book.  There is a reason for that.  Much of the book, written in the third person with quotes from the skaters, their families and coaches reads as follows: Tessa and Scott were so talented and coachable.  They are beautiful people, on and off the ice.  They are 'together' and focus on their key words.  Tessa and Scott were the smallest competitors at ___________ level, but they certainly weren't the slowest.  Even though they were on the top step of the podium, they were still the tiniest.

The book has plenty of eye-rolling moments.  While it is true that many Canadians have great edges, this book is clearly a Skate Canada ass-kissing production.  "Canadians are obviously doing something right with their edges."  "Everyone was so nice and helpful to us, and so Canadian."

In terms of insight, there isn't much.  They didn't talk much after Tessa's first surgery and it kept them feeling 'together' for almost a year.  They don't mean 'together' like a romantic couple, but they are flattered that everyone thinks so because it means they are doing their job.  Tessa often sees movies and feels the actor and actress should be together.  Tessa is very artsy and loves dance and fashion.  Scott is butch and technical and loves hockey.

Tessa and Scott were upset about not being selected for the 2006 Olympic Team because they finished second in the Original and Free Dances at Nationals (yet were still third overall.)

Tessa and Scott loved the new international judging system immediately and think it is wonderful for the sport.

Tessa and Scott never realized that no North American ice dancers had ever won the Olympics, because they only focus on themselves.  That said, most skating fans think Bourne and Kraatz and Wilson and McCall deserved World Titles (Blumberg and Seibert must've slipped Steve Milton's mind.)

Amidst the PR work of semi-fiction, there is plenty of reading between the lines to be done.

It becomes painfully obvious that Voir are Marina Zueva's 'baby.'  She pulled for them, gave them the Gordeeva and Grinkov music and dreamed of them winning the Olympics because they are 'man and woman on ice.'  Marina feels very Canadian.  Tessa and Scott just 'knew' they would win the Olympics. From the sounds of it, Marina certainly knew ahead of time as well.

Scott Moir is very 'confident' and 'competitive.'  Tessa is competitive too, but always thinks that everyone else is better than they are.  She doesn't give the team enough credit.  Well, the book certainly doesn't do anything to dispel the notion that Scott Moir can come across as being quite cocky.

David Pelletier became an 'adviser' to the team before the Olympics and acted as an agent for them (even though they have an agent.)  This was around the time that Tessa and Scott weren't really speaking or very 'together.'  They forgot to include the part where Jamie Sale wouldn't ride on the same tour bus and Tessa and David...

Tessa and Scott really throw Marlie a bone when they say many people thought they deserved silver at the 2006 Junior Worlds.  Yet, they failed to mention how many people felt the results should've been at 2010 Worlds.

Tessa and Scott had to get used to Marina and Igor yelling a bit and being direct.  (Understatement of the century.)

Tessa Virtue and Joannie Rochette were able to block out Mrs. Rochette's death because they are tough, competitive athletes.  (Okay, Joannie did an amazing thing at the Olympics, but does that really cancel out the rest of her career?!)

The book makes little mention of anyone who isn't Canadian.  They did mention that Tessa and Scott get Skate Canada to allow Marlie to train with the Great White North on their privately-rented ice outside of Vancouver.

Tessa and Scott now hope to move the sport to a new artistic level, though they will take their skating year-by-year, just as they did as little kids.
Posted by OlympicEffect at 12:54 PM