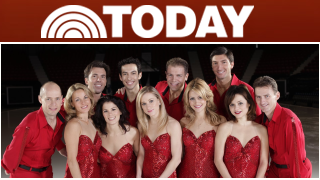 IMG's Stars On Ice team is extending an exclusive invitation to all NYC area skating fans for Friday January 21.  In honor of the 25th anniversary of Stars On Ice, The Today Show is honoring the tour and bringing all of its top skaters to Rockefeller Center for the occasion.  When will you ever be able to get that close to Katia Gordeeva and Tanith Belbin ever again?

The Invite:
JOIN US AT THE TODAY SHOW ON FRIDAY 1/21

The 1st 50 people to arrive will be taken down to  Rockefeller Center Rink's ice-level for the best view of the performance, the 1st 150 people will receive a free limited edition Smucker's Stars on Ice scarf created just for this event, and everyone who attends has a chance to meet the skaters.
Details:
When to arrive - Friday 1/21, 7:00am sharp! Meeting Place - The entrance of the promenade on 5th Avenue between 49th and 50th Streets (Rockefeller Center, New York City). Smucker's Stars on Ice staff will be there from 7:00am - 7:30am wearing bright red Smucker's Stars on Ice scarves. If you arrive after 7:30am, that's ok! Simply find a space near the rink to watch the performance and show your support. What to bring - Warm clothes and homemade signs!

See you there!
-Smucker's Stars on Ice Team

Additional Reminders:
* The Today Show appearance will air on Friday, January 21st on NBC from 8:30-9am EST.
*The Smucker's Stars on Ice 25th Anniversary Tour telecast will air on Saturday, January 22nd on NBC from 3:30-4:30pm EST. (Check your local listings.)
*The Smucker's Stars on Ice 25th Anniversary Tour comes to Nassau Coliseum in Long Island NY on April 1st, IZOD Center in New Jersey on April 2nd, and Webster Bank Arena at Harbor Yard in Bridgeport, CT on April 9th. Tickets start at just $25 and special on-ice seating is available!
Posted by OlympicEffect at 10:20 PM