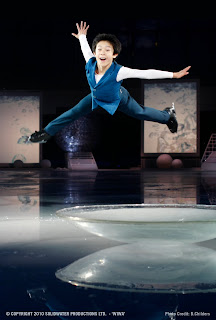 Nathan Chen won his second Novice National Title by a whopping 35 points!  His coach told Lynn Rutherford that he is landing triple axels on the ground.  Nathan remains an utter effervescent delight and we can only hope that his future will be filled with many bright performances.

Courtney Hicks is the new HBIC of ladies skating.  She is dominating the Junior Ladies event, as she has all season on the west coast.  John Nicks has done it again!  The master has created another skategasm.  Hicks leads Katarina Kulgeyko by seven points.  Lauren Dinh is third and Mary Beth Marley is fourth.  Nina Jiang landed her jumps cleanly, but did not have the technical content of the other ladies.  A fall on simple stroking has her in seventh place.  Her PCS were only average, despite performing brilliant choreography with effortless speed and loads of class and style.

Courtney Hicks has ever ingredient necessary to compete with the very best skaters in the world.  She is absolutely a skater who could throw a wrench in Mother Russia's plan to sweep the 2014 Olympic Games.

Videos from Canadian Nationals after the jump!


Posted by OlympicEffect at 5:40 AM