US Nationals Preview: The Pairs 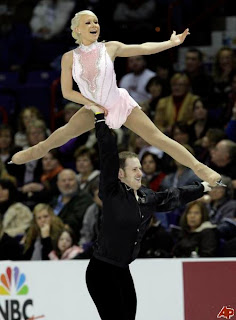 It has been several years since the United States has had respectable pairs.  In the '90s, Ina and Dunjen and Meno and Sand proved to be respectable, but following the retirement of Ina and Zimmerman in 2002, there have been a number of dark years at Nationals.  Inoue and Baldwin, Castile and Okolski, etc, the list goes on and on.

For the first time in a long while, there is going to be a true competition at Nationals.  Several pairs, who have been together for longer than eighteen months, are going to push one another for the National Title and the coveted two spots on the World Team.  The United States currently has four pairs with the ability to make it to Worlds, with three being deserving.

The battle in Greensboro will be between Yankowskas and Couglin, Denney and Barrett, Evora and Ladwig and Castelli and Shnapir.  Of the other teams who have competed on the ISU Grand Prix, Simpson and Miller have withdrawn and Zhang and Toth are questionable after a number of injuries to Felicia.


Castelli and Shnapir are the least likely of the 'big four' to advance to the Four Continents or World Championships.  Their dramatic size difference lends itself to inconsistency and a bizarre visual discordance.  Their 'Avatar' free skate fills an arena, but they need to perform well.  Their results on the Grand Prix were consistent: 153.33 and 159.85, but their best is the lowest among the four pairs.


Yankowskas and Couglin are on a competitive roll.  Their 166.72 at Cup of China is the top score recorded by an American pair this season.  Armed with the best fluff piece story, an 'Ave Maria' free skate dedicated to John's late mother, their skating is inspired.  This season, jumps, lifts and throws are all coming together.  Caitlin is a gorgeous 'flower' and John is a hulk of a 'stem.'  If their momentum continues, it is very likely that they could wear gold at Nationals.


Evora and Ladwig have never been in the 'champion' position, but they continue to impress every time out.  A surprise addition to last year's Olympic Team, they continue to absorb every experience and look to be late bloomers.  The additional USFSA funding has helped their costumes and overall presentation on the ice.  Both Amanda and Mark have gorgeous lines and together they make a gorgeous pair.  Their improvement between Cup of China and Cup of Russia was noticeable, but they don't look to have peaked thus far.  Their lifts are the strongest in the nation and they may be the unsung heroes in Greensboro.


Denney and Barrett have been solid for the last two seasons, but not spectacular.  Despite failing to medal on the Grand Prix, their 166.42 at Skate America is a formidable result.  Of all of the teams, they may be the least popular.  Switching to John Zimmerman has helped to erase the tackiness that was Caydee's red Firebird extensions last season.  They are very much: Rachael Flatt the pairs team, despite having more flair and overall interest to their skating.  Caydee is a weak 'flower.'  There is something off about her presentation and she does not make a visionary flower in any of their lifts.  It is difficult to get excited about their skating: Jeremy looks positively middle aged and Caydee has an unfortunate resemblance to the reigning US ladies champion. David Wilson's choreography has proved to be a vast improvement, but he isn't a miracle worker.


Marley and Brubaker are a new team hoping to make an impressive showing at Nationals.  It is too soon for them to be contenders, but it shouldn't be long before they reach heights never seen by Keauna and Rockne.  In terms of partners, he definitely upgraded.
Posted by OlympicEffect at 4:51 PM

Labels: Castelli and Shnapir, Denney and Barrett, Evora and Ladwig, Marley and Brubaker, Simpson and Miller, US Nationals, Yankowskas and Couglin, Zhang and Toth