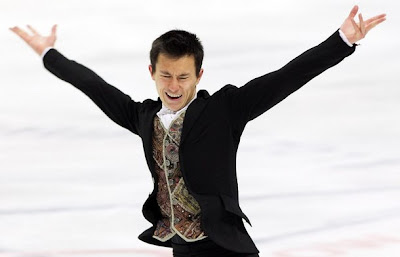 I slept in and am watching this broadcast on Universal Sports.  Let's pretend this is live.

Ross Miner validated his trip to Worlds by delivering two clean programs with three clean Triple Axels.  His Casablanca is a total knockoff, but it is fine for this season.  Next year, he needs to leave Boston and work on his overall skating.  I'd actually send Ross to Frank Carroll to get some better actual skating skills in there.  It is time to work on the polish.  He is very similar to Tim Goebel and it is time to follow his career path.  Time to move on from a B-List coach to an A-Lister.   (217.93)

Brian Joubert led off the second-to-last group in a new outfit.  He looked noticeably worn out, but managed a clean opening Quad Toe.  The strength in his music really helped his overall performance. Triple Toe.  Triple Axel+Double Toe.  The evolution of the IJS has really not helped him out over the years.  Brian was born just a few years too late.  Triple Lutz, Triple Axel, Triple Salchow+Double Toe, Triple Loop+Triple Toe (turned out.)  Weak spins for someone of his stature in the sport.  I'd prefer even more man-cleavage from him.  I'm sure his mother would too.  Triple Flip to end.  He isn't an artist by any means, but he definitely is entertaining when he is on.  Brian's looks help just a tad.  And the cameraman apparently agreed by zooming in on his crotch following the performance.  Another crotch shot.  He is looking a bit excited.  (156.38/227.67)

Richard Dornbush- Are we calling him Richard or Ricky?  I guess now is not the time to decide.  Triple Flip, Triple Axel (Hung on!), Triple Lutz, This program is really designed well for maximum points.  He looks like a rookie, but a good rookie.  Triple Axel+Triple Toe (X), Double Salchow (X), Triple Flip+Double Toe+Double Tano Loop (X), Double Axel+Double Axel(X), Peter Carruthers is falling in love with him for making this a sport.  Triple Loop(X).  I hope he stops skating before Peter Carruthers ruins my admiration for him.  It is time for him to leave his coach and work on the overall artistry and skating skills as well.  The Americans cannot allow the best talent to fall into Broadmoar Boredom/Mediocrity.  The program was a bit flat, but it was executed.  Ricky would've been a great #3 on any US Team.  With a good Jeremy Abbott or A-skater, the US easily would've had three skaters next season.  Evan Lysacek has been training his quads on tour.  I hate hate HATE to say it, but the USFSA may need to pay him to come back (like they did with Sasha Cohen.)   (151.88/222.42)   Sadly, his eventual ninth-place finish is the worst top finish ever for the American men.

Michal Brezina- Mr. Bel Ami is still wearing that same ugly costume.  Swoosh Triple Axel, Quad Toe, Quad Salchow (hung on!), I must say, I am so sick of this program.  With Brezina, the program is of little importance.  It is all about him being attractive and jumping well.  Does it really even matter to the judges anymore what the program is?  They don't actually evaluate choreography.  The spins could definitely be better.  He is the kind of skater who might earn more points in Zhulin tights.  Huge Triple Axel+Double Toe (X), Triple Flip+Triple Toe (to a stop)(X), Triple Lutz- Fall (X), Andrea Joyce keeps mentioning his surgery, but that was 10 yrs ago with the length of this season.  Triple Flip-Fall (X).  Scott Hamilton would blame the mistakes on the excitement of the earlier quads.  Can anyone hear Scott yelling in Ottavio's ear UHHHHHHHHHHHHHHHH?!  Note how Scott and Ottavio are buddy-buddy now that he's going to make some money for the ISU.  (156.11/233.61)   Those two falls really negated landing both quads.

Who begged Ryan Bradley to come back?  From The Boards?  Barbie Backstage?  Blazing Blades?  Seriously.  Bad life decision.  Quad Toe. Ryan really needs these jumps (and a miracle) to place well.  Quad Toe+Single Toe.   Triple Axel, Andrea Joyce called it that there is no chance of the US earning three spots.  Triple Lutz.  The Russian audience is not buying his Scott Hamilton Schtick.  There is always Elvis On Ice for the Ryan Bradleys of the world.  Double Axel+Double Toe.  Let's be honest: Tom Z is only a jump coach.  He isn't even a brilliant one given all of the < and << that fill the protocols of his skaters.  Triple Loop.  Triple Salchow+Triple Toe+Double Toe.  Ryan is blaming this on being low energy and maybe 'peaking a month ago.'  Triple Flip.  Yeah, let's go with him 'peaking a month ago.'  I do notice that the extra five weeks shrunk the size of Ryan's ass.  Those spins, the footwork...  Ay dios mio.  He thought he could be competitive.  (142.26/212.71)  Shock of shocks- the National Champion is the lowest of the American men.  Note when we discussed his inflated PCS at Nationals and how it distorted the final results.

For the person who asked below, I'm fine with Evan competing quads a year and being forced into retirement with a lame foot.  He needs to hold the country over long enough to regain three spots.

The inevitable happened.  Patrick Chan won.  We knew it was coming all year.  We knew it was coming for a few years now, but I stupidly forgot to pick him for fantasy.  Patrick managed to land Two Quads and only fell out of his Triple Axel.  The rest of the program was typical Chiddy.  I've seen this program in person twice and I don't get the subtle power that Sandra Bezic mentioned on twitter.  I am impressed by the skating skills, but the overall artistry is just whatever for me.  I don't find it authentic or buy it.  The program is overdone and it feels like he's done it for a decade.  It is time to send Adam Rippon to Christy Krall.  Send Dornbush too, as he has the potential to nail a quad. (187.96/280.98)

Nobunari Oda- The man who can't count to three did it again!  Triple Toe+Triple Toe (Very Kwan), Sadly, his artistry is not very Kwan.  I'm bored already.  Triple Axel+Triple Toe (combo will not count for points-Zayak rule violation), He may be lucky that Lee Barkell seems so nice.  Nikolai Morozov would throw a full bottle of vodka at him (and then drink it when the hole in his brain cushioned the blow.  Andrea Joyce is trying to blame his mistakes on the fact that he had to postpone his shotgun wedding---she really just wanted to get that bit of trivia in there.  The rest of the triples are solid, but he is so screwed that it doesn't even matter.  His knees are ridiculous.  I want them.  I feel like he took his knee caps out the way Janet Jackson had those ribs removed.  This program does nothing for me.  He should really just stick with Charlie Chaplin.  I hope his kid takes remedial math.  (150.69/232.50)

Artur Gachinski- whatever happened to his training mate who blacked out, stole and crashed a car and then went gay for pay?  Artur is doing the turns on his right foot like Berezhnaya and Gordeeva to establish balance.  It works.  Quad Toe.  Triple Axel+Turn Out+Double Toe+Double Loop.  Mishin is responsible for some of the tackiest and grossest skaters ever (Gachinski included), but his theory of jumping works.  Triple Axel.  Ugly catchfoot spin.  Ugly costume. Ugly choreography.  Ugly hair.  Distracting gloves.  Triple Lutz+Triple Toe.  Phil Hersh is having a skategasm over him using Shoshtakovich's 'The Bolt' like Brian Orser.  Phil Hersh likes to pull a Dick Button and prove that he is smarter than the rest of us, only it isn't nearly as charming.  Artur skates through his music.  He spins when he should be creating highlights, landing jumps, adding flair, etc.  Instead, he does some stupid Plushenko tackiness and craptacular spins.  Triple Lutz.  Triple Flip.  He even has the ugly legs that Plushenko had in his jumps with the awkward knees that somehow make for brilliant jumps.  Double Axel.  Did he almost fall on footwork?  Was it planned?  Who cares, really?  The Russians can't claim superior taste when they love this and hate on Ryan Bradley.  It is both shitty.  I'm glad I picked him for fantasy.  I had a feeling the Russian cheating would land him on the podium.  I'm just sorry I had to watch that mess of a ''program.''  (163.52/241.86)

Daisuka Takaharding- He picked in for a quad toe, the blade came loose and he wound up with his legs on the boards.  Japanese ladies ran to fix his blade as the ISU held a stop watch.  This was not to be.  It was over before he even took the ice.  Scott and Ottavio are butt buddies this week.  Let's take a moment to point out his J Lo booty in those pants.  Very nice.  The ISU didn't let him do the entire thing over, which is funny, since they allowed some people to use vocals.  Triple Flip+Triple Toe, Triple Loop+Double Loop+Double Toe.  He isn't getting much run out from his jumps.  It is a tad Slutskaya-like.  Daisuke likes tangos just a tad.  His expression and choreography is much better than Chan's...yet the marks never seem to reflect it.  Triple Axel (Flipped out), I am blaming him on changing that costume in the short.  It ruined his mojo.  Triple Axel+Double Toe.  He is cranking some serious edges.  Triple Salchow (fall forward.)  Triple Lutz.  Great footwork.  He didn't get the levels he needed to be a contender.  His coach needs to go through that program with a scalpel for next season.  (152.72/ 232.97)

Does Daisuke have hair gel commercials in Japan yet?

Takahiko Kozuka- Quad Toe. (Rotated and solid.)  Triple Axel.  If only this boy would become a performer, he'd become my favorite skater.  His anticharisma makes me appreciate him rather than love him.  Triple Lutz+Double Toe, Triple Axel+Double Toe+Double Loop (X), Triple Flip (X),  Triple Lutz+Triple Toe (X), Triple Salchow (X), Triple Loop(X).  We can only hope that Mao skates this well.  Kozuka's levels were 4s for his spins.  He was the Japanese man of the season. (180.79/ 258.41)  I've never seen Nobuo Sato have such emotion.  He was more excited than when his daughter won Worlds in Japan.

Florent Amodio- Did he add the white stripes to his boots?  He added vocals to his program and we later heard that it was on purpose 'as a gift to Japan.'  I don't know how Fergie's voice is a gift to anyone, but Oprah does tell us to like her.  How is it a gift?  Risking a point violation to ensure three spots for Japan?  This is quite the French moment.  Peter Carruthers is pretending to like this program and not mentioning the vocals or music.  Someone the ISU didn't care and didn't deduct it?  Morozov connections? Triple Axel.  Triple Axel+Double Tano Toe, Triple Loop, Double Salchow+Triple Toe+SEQ (X), Triple Lutz (X),  Triple Flip(X), Triple Lutz+Double Toe (2ft- X), Double Axel (X).  Morozov has made the hot mess Amodio a consistent skater.  Now they need to add some actual transitions and a few quads.  He is one of the most entertaining hot messes ever, but we need to question if he'll ever make the podium without some upgrades.  I do love the whole mess. (152.04/ 229.68)   Bizarre that Peter Carruthers and Andrea Joyce didn't mention the vocals.

It is a bit of relief knowing we lived through Patrick Chan winning with an actually decent program.  Still not a huge fan.  Let's hope it is a 'won and done' situation.
Posted by OlympicEffect at 3:18 PM