A Season of Randomness 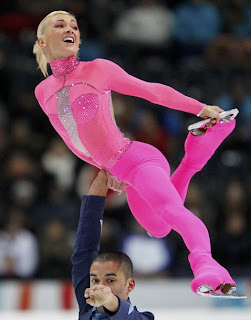 Next week, the culmination of one of the most random seasons in figure skating history will finally occur.  If Japan had its way, they'd still be hosting the event.  Japan still wants to host the World Gymnastics Championships and wanted to host the event amidst aftershocks and nuclear meltdowns, yet Ottavio succumbed to Mother Russia's (always questionable) complete funding of the event.  For years, we've all known of bizarre ties to Russian skating that somehow make sense when you think of all of the mysterious yet wonderful Russian female ice dancers.

Let's give a basic run down of some of the events that occurred this year:

-Yu-Na Kim and Brian Orser split after being butt buddies, starring in commercials together, winning an Olympic Gold Medal and decided to take their split public.  His moodiness and the lack of translation from her management team allowed for one of the most amusing splits in history.  As she is an emotional champion to the people of Korea (and the devil to the people of Japan), it was a-ma-zing.  Really, it was so much fun that we all wish they'd split again.  She is now with Michelle Kwan's brother-in-law and may very well win a Worlds after not competing all season.  Her team never considered competing at Four Continents.  It's just...bring it on!

-Evgeny Plushenko was banned by the ISU, seemingly for breaking some sort of annoying rule, but really for just everyone being tired of him being an asshole.  The judges could no longer award him PCS with straight faces and he just awards himself medals anyway.  Plushenko had major drama with the Russian Figure Skating Federation (who doesn't?) and now seems to be determined to come back.  New fans who didn't understand eligibility thought it was somehow a wrong of the ISU to declare him ineligible.  Ah, those of us who remember pro skating...

-Mao Asada changed coaches (again) and suffered through a hot mess Grand Prix season that was oddly reminiscent of any time Nicole Bobek competed that wasn't Nationals or Worlds.  Mao does seem to follow the Bobek timeline: Hot Mess Fall, Get it together just in time for Nationals, have a solid Worlds, change coaches (repeat cycle.)

-Ryan Bradley is the US National Champion.  He sort of won.  Ryan asked his Facebook and twitter fans if he should compete again (as if anyone would say no) and was back by ''popular demand.''  Everyone seems to have an ''oh, Ryan..." mentality.  It is a cross between admiration or pity.  He really needs a program dedicated to a deceased parent.  He has reached that sort of status where we ''have'' to like him.

-Jeremy Abbott had a hot mess of a season after a strong first Grand Prix event.  He had boot issues and blames the season on that.  We want to believe him.  We were willing to overlook the ups and downs of the past and blame the boots, and then he went platinum blonde...

-Voir rushed back in time for Worlds.  They competed at Four Continents, yet withdrew mid free dance due to an ''injury.'' The jury is out on WTF that was about (injured or saving face), yet they are wonderful and may very well win Worlds.

-Marlie was ready to be the first ice dance team to win a World Title.  It appeared inevitable.  Then a tsunami happened and it may very well just not be meant to be for an American team to ever wear gold at Worlds.

-Carolina Kostner stopped performing most of her triples and started winning competitions.

-Rachael Flatt thought it was a good idea to skate to East of Eden and wear Big Bird Yellow.

-Katia thought so highly of North America that she dropped her Battle of the Blades Trophy moments after winning it.

-Nicole Bobek used being let off with community service as a way of publicizing her return to the ice (and it is the most training she's probably ever done.)

-Adam Rippon and Jeremy Abbott both missed the World Team.  They didn't skate well, but it wouldn't be above the USFSA to rig it and send them.  Yet, the US may have only one spot next year.  And that is just reality.


With so much going on, it has been a most entertaining post-Olympic season.  The match ups at Worlds are well known.  It is Marlie vs. Voir in ice dance,  Yu-Na vs. Mao vs. Miki vs. Czisny (maybe) in ladies, Takahashi vs. Chan vs. Everyone in men's and Savchenko and Szolkowy vs. Pang and Tong vs. Mother Russia in pairs.

With the culminating event being held in Moscow, this event is surely not going to disappoint.  Just imagine who could be in the stands...  Let the fur fly!
Posted by OlympicEffect at 3:17 PM