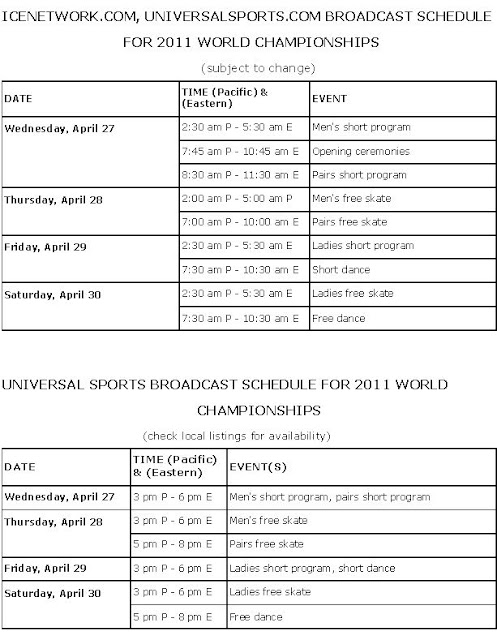 The 2011 World Figure Skating Championships will be streamed live online, but delayed on TV due to the event being rescheduled.  The USFSA press release breaks down the special event subscription fee on both Ice Network on Universal Sports.  I for one know that I will be going with Universal Sports (and $5 more) to hear Tara Lipinski and Judy Blumberg's commentary.

Across the pond, the British Eurosport TV Schedule.

Jeremy Abbott reflected on this year and discussed next season with Lynn Rutherford at Proud Nation.

Pechalat and Bourzat are ready to fight for a spot on the podium at Worlds.  They are certainly favored to win at least bronze.

Blahtah hopes for no more lineup changes.  It is amazing how the Utah press keeps the team in the news by writing about a hang nail that took place 10 days ago.  That is Greg's relationship with the media filling that stadium every week.

There will be live results and video of this weekend's NCAA Championships on NCAA.com.  Note that the event is now Fri-Sat-Sun after being Thurs-Fri-Sat for years.

Serena Williams got back on the court yesterday after almost a year of injuries and health concerns.  Her return to competition is unclear, but certainly is widely anticipated.

Mark Ballas and Pia Toscano have been dating in front of the paparazzi lately.  One only needs to wonder just how much this was born in publicity, as Mark was pretending to be a singer again and put out an album yesterday and Pia needs to keep her 15 minutes of fame alive.  TMZ (sadly a huge authority), said that Pia is signing/has signed by now with Interscope Records.  She was never one of the top vote-getters on Idol despite her obvious talent.

Sugar Ray Leonard and Anna Trebunskaya got the boot on DWTS last night.  It probably should've been Kendra, but her bad attitude does make things interesting.  Sugar Ray was dull and his marks were  inflated.


NCAA Preview with Oregon State (that interviewer is one passionate academic gym fan.)

Posted by OlympicEffect at 9:28 AM