The Short Dance: According to Judy 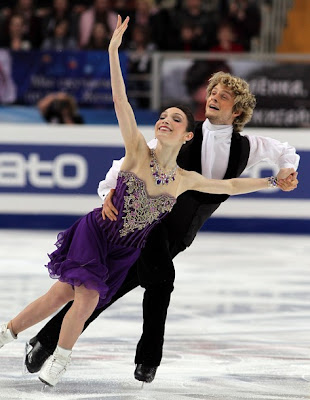 Earlier today, I watched the short dance and wasn't sure what to make of it all.  My knowledge of the discipline has grown exponentially over the last five years, but the nuances of the Golden Waltz are a bit much for anyone to just be making evaluations over that go beyond pure snark.  To be fair, I'm not sure whether Tanith Belbin is even familiar enough with the dance to be providing worthwhile commentary.

Luckily, Judy Blumberg was brought in the school all of us on the Golden Waltz.  Judy's voice may be self-satisfied and her demeanor can grate on some, but listening to her is like learning from a master.  There is a reason why she is a Caller Extraordinaire and used to help teams across America find all of their shortcomings.  Like a good Jewish mother, Judy is able to find fault with almost everything.

Chock and Zuerlein were the first of the top skaters with their Edith Piaf program (or Edith Pilaf according to Tanith.)  It was a decent effort.  Judy thinks they need consistency and to present more (and use the ice more.)  Their program and performance was smaller than the top few teams.  It is frustrating for this team to fall behind the Shibutanis, but Judy is right that they lack consistency.  They've made errors throughout the season.  Madison has made a number of the errors, but she is an absolute star.  Greg's performance and posture need work, but he is a solid partner.  She just shines and they may find themselves in a difficult position once Samuelson and Bates return to form.  It was be a fight for that third sport on major teams and though they improved immensely this season, there is work to be done. (61.47)

Weaver and Poje continue to improve this season.  Seeing Krylova at the boards is absolutely a treat.  They are better matched that Chock and Zuerlein and have better maturity.  Their strong transitions really stand out.  Judy lived for their straight line lift, but wasn't impressed by their choctaw.  She thought they really maximized their steps on the NTMSS.  Etta James is a perfect vehicle for this team.  65.07

Voir returned to the World Championships with a short dance that we've seen them perform a few times.  As Judy pointed out, the dance has a vintage feel that works for them.  It is not the best short dance out there this season.  It has always been a tad underwhelming, but the strength of their compulsories makes them formidable under any circumstance.  Judy found their No Touch Midline Step Sequence to have great edges, but thought it was slow for them.  She pointed out the snow flying on the 3-turns, which is clearly one of their pet peeves.  They're riding up on those toe picks!  Surprisingly, Judy's OCD pointed out the lack of flow and slightly jerky nature of Tessa and Scott's Golden Waltz pattern.  Judy was NOT amused by Tessa's bobble and slight change of edge on her choctaw.  "That is not a particularly difficult lift."  To sum it up, the program is a bit blah but they do it well.  It doesn't 'wow' you.  It is Tessa and Scott being amazing skaters, but there is something about it that isn't pushing them to the next level the way their programs did a year ago.  It is a bit safe.  I adore both Marlie and Voir and initially thought that Voir would lead after the short dance, but Marlie would likely win the free.  I'm not sure that they deserved to be leading, but Skate Canada has learned how to back their skaters with zeal over the past few seasons.  (37.94/36.35=74.29) Highest Short Dance score ever.

Crone and Poirier had to follow that and failed miserably.  Judy pointed out that they're 'athletes' who 'make it look like work.'  Their twizzles were problematic.  They had a strong Grand Prix, but they didn't peak at the end of the season.  This was a very Jeremy Abbott Goes To Worlds type of performance.  Momentum and details were gone.  (31.85/29.16= 61.01)

A year ago, everyone was saying that the Shibutanis should split.  She was too short for him and they were hopeless.  A year later, she has grown a few inches and everyone loves them.  It isn't like she sprouted half a foot overnight.  Skating fans are fickle.  The judges appreciate them and the fans do now as well.  Judy was having to fan herself over their flow, clean edges and speed.  This year, they've dodged a bullet in terms of the sibling thing.  They aren't doing any tangos to creep anyone out.  Everything they do is very textbook.  I'd like to see their short dance have more flair, especially in their compulsory dance section.  That said, they skated the third best dance of the day.  The perfection of their unison is tough to compete with.  Their speed was even evident on TV.  (36.14/ 30.74= 66.88)  If there wasn't such a political pull for Pechalat and Bourzat and the Shibs weren't rookies, I'd expect them to be top three.

"They should call the Golden Waltz the really hard waltz."- Alex Shibutani


If there is one skater Judy doesn't like, it is Bobrova.  Judy noted every change of edge and poor shoot the duck in her program.  She didn't get that leg to her dead quickly enough.  Judy's hatred for Bobrova is something to watch out for in the free dance.   (34.51/31.37=65.88)

Marlie finally took the ice.  Meryl was looking positively smashing in her new purple and gold dress.  The dress was heavenly when it moved.  During warmups, Charlie fell on their Twizzles after a traffic malfunction with Bobrova and Soloviev.  Again, Bobrova is just ruining this competition.  As a program, as a dance, this short dance is superior to Voir's.  They performed it and skated it out better than the Olympic Champions and I believe a difference greater than .05 would be warranted.  After seeing it on TV and having all of the details pointed out on a big screen, I think they likely should be first.  As one former ice dancer put it, "A lifetime of dance training, Canadian pull, and an uncanny resemblance to Kate Middleton got Tessa in first place.  It is their day"  Despite Charlie missing the jump feature to their twizzles and not grabbing his blade quickly enough, the rest of the program was the strongest they've ever performed it.  Judy noted the nice 3-turns and the lovely ride of edge.  It was a fast dance with lots of flow.  Following the program, Meryl and Charlie appeared pleased but focused on the scores.  It is clear that they've been working their asses off for this competition all season long. Meryl can't get any intense.  If the competition was a week later, she would've risked becoming positively invisible.  Second place looks to be eating away at her and there absolutely was a look of exasperation when the marks came up.  When their leg line is even matching and the extension improving, one really needs to wonder what the USFSA will need to do to get them in first place.  Judy knows that game well---just ask her what happened to her Olympic medal.   (37.36/36.40 = 73.76)

Cappellini and Lanotte were rusty.  Que Sera, Sera, but there was all sorts of snow flying in the Golden Waltz pattern.  It just looked like October or November on the Grand Prix for them.  They may have won the Mont Blanc Trophy, but Judy found the choreography simplistic and not as sophisticated as the other top teams.  This is a gorgeous couple.  The potential is there, but it remains to be seen whether they will ever move to the next level.  (34.50/29.62= 64.12)

Ilinykh and Katsalapov remain eye candy.  Their program remains a cluster fuck of terrible music.  Their speed has actually improved.  As one friend put it, Elena could be Miss Russia.  They are not dancey enough in their Golden Waltz for Judy (true), but the potential is there.  Elena and Nikita have the 'it' factor and that tends to go a long way when you're Russian.  Judy kept treating them like Tanith Belbin and mentioned how attractive they are (and how much refinement is needed.)  She did NOT live for their music by any means. I must say that I'm glad I don't have to see their short dance again.  It doesn't live up to their other programs.  They've fulfilled their Russian crap quota for the next five years.
(34.58/30.93 = 65.81)

Pechalat and Bourzat, Mr. and Ms. Fourth Place, skated out and Judy initially gushed over their 'intention of movement.'  It sounded very Val Kondos if you catch my drift.  Perhaps a smidge Sandra Bezic?  The love didn't last because Judy noted that Natalie was rocking her edges on their elements.  One of her twizzles was really a spin on the first twizzle pattern, but it didn't seem to affect the judges.  There is a real push to get them on the podium after all of these years.  They're like one of those almost-Russian ice dancers who is finally being thrown a bronze medal at age 35.  Given the strength of the Shibutanis' free dance, Didier should keep talking about gifting Worlds back to Japan next season.  They didn't look 'on.' (36.93/ 34.04 = 70.97)

Will Meryl finally win gold?  Will Tessa skate a full free dance?  I can't wait to find out!
Posted by OlympicEffect at 8:41 PM