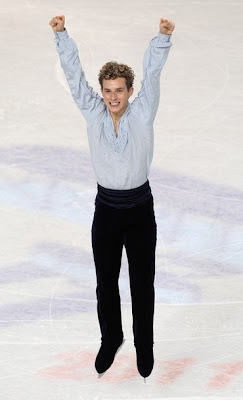 Earlier today, Adam Rippon formally announced that is ending his professional relationship with Brian Orser.  It is not surprising.  This season was supposed to be Adam's.  With the absence of Lysacek and Weir, it was time for Adam to take his skating to the next level.  Armed with programs he felt jazzed about, Adam was eager to show improvement in all areas of his skating.  At the Japan Open and Skate Canada, he looked like it was coming together.  By the time he had a disastrous long program at Skate America, his problems with his triple axel looked like they had not been ameliorated in the slightest.  A short program at Nationals sunk his hopes of making the podium, but it appeared that he had potentially gained a bit of momentum by coming back in the free skate.  It was not to last because Adam's effort at Four Continents was one of the worst since he was neglected by Nikolai Morozov during the fall of 2008.

Adam is one of the most beautiful male skaters around, but his jumps continue to plague him.  He is a delicate skater and while he is a perfectionist, his jumps don't always have the requisite power of a senior international male hoping to win titles.  Adam is the nice boy your grandmother would love, but he needs a bit more fight and power on the ice.  Suzanne Bonaly even suggested to me that this may be as good as Adam ever gets.  He is a wonderful skater, but he needs a consistent triple axel and a quad.  Orser discussing adding the quad to Adam's program for two years without it ever coming to fruition.  He trained it during his monitoring session at the Liberty Open in 2009, but it looked underrotated.

After a season that went disastrously off track, it isn't shocking that Adam Rippon chose to leave Brian Orser.  One thing he was hoping to gain from 'Mr. Triple Axel' was a consistent one of his own.  That hasn't happened.  While the coaching change itself isn't shocking, the choice of his coach is curious at best.  Adam will continue to train at his rink in Toronto, but he will work with Ghislain Briand.  Ghislan has been on his coaching staff for two years and has worked with him on his jumps.  If he is looking to improve, one would think that he would look outside of who he's already been taking from.  Given his style of skating, one might even think he'd be looking to take from Priscilla Hill.  Priscilla is known for helping her male students with their triple axels.  She gave Johnny a beautiful one and has helped Armin fix his.

With so much talent to work with, I just hope that Adam is making the right decisions for his career.  One can only imagine how awkward it will be continuing to train on the same ice as his former coach.  This marks the second time in less than a year that a high-profile student has parted ways with Coach Orser.
Posted by OlympicEffect at 6:28 PM