Make It Or Break It: A Land of No Consequences 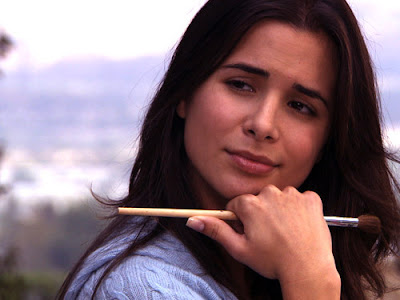 Make It Or Break It is back for another award-winning season and the writing is as terrible as ever.  Remember, this series is geared at a teen and tween audience.  While I am not the target demographic, I can't seem to quit this show and neither can many of you.  We know it is complete shit, utterly unrealistic and yet we keep watching it.  Instead of giving a recap of all of that has gone on or not gone on, I'd like to take a moment to stand on my soapbox and discuss the mixed messages this show gives girls.

These bitches are elite gymnasts.  Amazingly, we learned that full-figured Payson is just sixteen years old.  As laughable as that is and the fact that the biggest gymnast is considered the best (and has no weight issues), it is important to remember that this is a ''message'' show.  A message show that focuses on sex.  It gets the viewers, but it doesn't necessarily always deliver those morals clearly.

On Make It Or Break It, consequences are limited and gymnasts and coaches are quitters.  How many times has Sasha left, threatened to leave or been fired?  DJ Tanner is supposed to be the good girl on the show, yet her lover leaves and she immediately crawls back with her ex and forgives him when she couldn't before.  The writers are subtly telling girls that they shouldn't be strong on their own or wait for Mister Right.  Even an eleven-year-old could tell you that Lauren's father is a slimy asshole, but it is somehow acceptable for DJ Tanner to always 'see the good in him.'  This is where people like DJ Tanner get reputations for being naive. Emily, who doesn't look a day under 30 in some scenes, just robbed a pharmacy.  Yes, she was doing it for her brother, but she somehow has wormed her way back on the National Team.  She is about to sign a paper with restrictive rules that we know she is about as likely to follow as not having a job and not dating boys.  Hmm, how did having a job and dating boys affect her?  She lost her scholarship for a hot second, yet everything always seems to workout in Emily world.  See, she is somehow inspiring and the most amazing girl ever.  I think I just came up with another title for a song, 'You're The Inspiration.'  Mind you, Emily may be the worst actress on the show.  She also has some of the worst lines.

Emily is now about to give it up to her boyfriend.  She may actually get preggers and that would teach tweens to use condoms or not have sex?  Yet, somehow, Emily will wind up being an award-winning mother and still manage to get back in shape for the Olympics.  They will not keep her out of the gym for long.  Someone will help her take care of her baby, her boyfriend will stay with her and all will be well.  Realistically, the writers would drive the message home by forcing Emily to work a low-rent job, have her man leave her and show her baby crying all the time...in a wheelchair...like her sometimes brother.  Where did he roll off to?

Payson has a guy who wants her and thinks she is beautiful, despite being one of the least fun people on the planet.  Sasha awakened the emotional artist in her, yet that is no where to be found.  She is not buying into Iyanla Vanzant as Head Coach or any of her Oprah bullcrap.  As usual, she continues to have quite the negative attitude off the bat, yet everyone still looks at her as a role model.  Whatever.  Payson lied to everyone, broke her back irreparably, yet somehow got bullshit imaginary surgery and managed to come back and make the World Team anyway.  The moral of the story there is that if you almost kill yourself by becoming a druggie, it is fine as long as your heart is in the right place and you can paint beautiful canvases looking like Sugar Plum Fairy in the New York City Ballet. 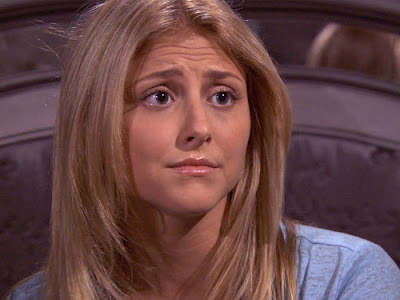 Lauren is still crying about her mother and who knows what else.  Her father promised to be honest to DJ Tanner, yet we know that even she hasn't learned her lesson.  Lauren's dad refuses to accept that his daughter is a psychotic, whorish, lying wench and lets her continue to walk all over him because she refuses to accept that her mother was a drugged-out hussy who probably caused her to have much of her apparent mental illness.  Lauren's old beau moved to Denver.  He really loved Kaylie, but she doesn't seem to have any interest in him.  He was only a still rings specialist and Kaylie likes Olympic Champions.  Might as well date someone who could help advance her career and endorsement potential.

Now, the only somewhat interesting storyline is the fact that Kaylie is in rehab for her anorexia.  Yet, they somehow let her our extremely early.  They put her in a room with a repeat offender who is going to die.  It will inspire Kaylie to learn that eating right is the way to be and she will magically make the World Team.  She will then help Emily to the rest room to give birth to her baby once she starts feeling contractions during the middle of her beam routine.  Emily will hide her pregnancy and consider putting the baby in a dumpster, but Kaylie will remind Emily that she is an amazing inspiration who can do anything.  Somehow, Emily will blame her mother for the fact that she herself is also a whore.

The evil model is trying to get Kaylie to steal Emily's man, but she has one of her own who realizes that she is actually sick.  He appears at the gym from time to time.  Kaylie will lose her will to starve once the model dies.  Hopefully she'll have some more Meatloaf rages over art therapy, as that was enjoyable for all of us.

My favorite moment was when Kaylie was supposed to act happy over gaining three pounds.  Some of us have been there before.  Why DO they try to traumatize these girls by forcing them to eat mashed potatoes in rehab and announcing their weight gain?  What happened to freeing yourself of the number?

Note: I did like for Lauren pulling a Garrison mount out of her ass.  I also love that the writers seemingly know so little about gymnastics that they had Payson's stunt double do a shaposhnikova yet made the lame double flyaway be the climactic 'shaposhnikova' dangerous new skill element of the routine.
Posted by OlympicEffect at 12:40 PM