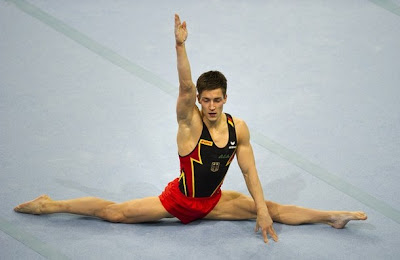 Philipp Boy is bringing sexy back at the European Championships.  Things haven't been this enjoyable since Nemov, Ivankov and Bondarenko were battling it out for titles.

MLT uses her OCD and detail-oriented personality to be one of the few top bar coaches in the US.  Amanda Jetter's weakest event was bars before she began training with Mary Lee, but it has become a steady event for Amanda.  She isn't talent on bars, but MLT has done her best to give Amanda solid technique.  The technique and drills are very technical and American (lacking flair), but it is a step above anywhere else aside from WOGA or Hills (where Kelli is retiring.)


Kirstie Alley and Maks will be on Oprah on April 14th.  I'd say good luck beating that support, but Americans proved their utter lack of taste by voting Pia Toscano off of American Idol this evening.

If you can make it out to One Step Closer, it will be a great show this year with some lesser-known but wildly entertaining skaters.  It is for a great cause and I'm bummed that I can't make it this year.


Jay Clark previews NCAAs.  He gives some great insight on the Gym Dogs.  It turns out that both of Mauro's achilles are inflamed and Laura Moffatt is now battling Christa Tanella for a spot in the beam lineup.:

Posted by OlympicEffect at 8:35 PM