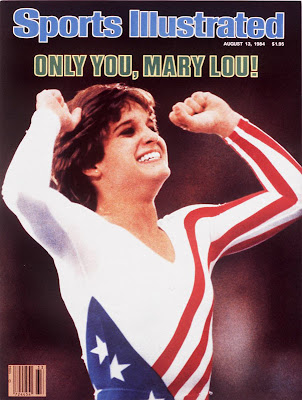 It goes without saying that Mary Lou Retton only won her gold medal due to a boycott and was even lucky to win under those circumstances.  I'm not saying Bela is Italian, but I'm saying he knew how to wheel and deal like Carlo Fassi.  That being said, it is important for the newer fans of gymnastics (and skating fans) to realize just how diabolically cringeworthy it is to hear Al Trautwig mention Mary Lou Retton as an Olympic Champion who everyone wants to be like.  Americans suspended reality when watching the country dominate the 1984 Olympic Games (the tri-meet with Canada and China.)  It was almost as if we all went along and watched the Muppets together.  Miss Piggy is real and Mary Lou is the best gymnast on the planet...

Olga Mostepanova won the Olomouc Alternate Games in 1984 with a 'Perfect 40.'  Both Olomouc and the '84 Olympics were scored with the legitimacy of an NCAA dual meet in Stegman Colosseum or Pauley Pavilion today.  While Mostepanova's score may be dubious (along with her birth certificate, '68 or '69, she even says '70), it is important to remember that Mary Lou is the luckiest gymnast ever.  Ms. Mary Lou has made millions upon millions smiling when deep down she knows she'd have been lucky to have finished in the top five in a fully-attended Olympics.  Had the Olympics been fully attended, Olga Mostepanova pixie perfection may very well have captured the world's imagination in the fashion of Korbut and Comaneci.

When Mary Lou smiles her way to more money on television, it is important to reflect once in a while on just how well she compared to the best in the world.  Forget Szabo's tears, they were both incredibly lucky.


Remember when gymnasts actually danced?  Code supporters---argue that one!