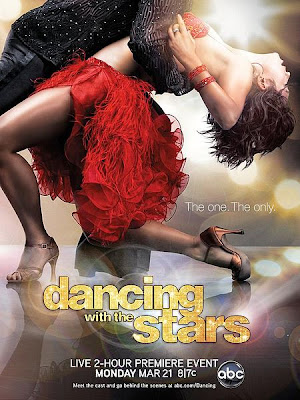 Dancing With The Stars is moving past the early weeks and starting to get into the groove a bit.  This is when the shit gets good.  Already, this season is quickly becoming one to remember.  Remember when everyone was bitching that there were no celebs and that it would be a bomb?  Once again, everyone is hooked and the ratings are huge.

This season, the word is that Idol has its most talented cast ever and that the DWTS cast is the most evenly-matched ever.  That makes it exciting, but the judges don't really understand the importance of the marks.  It is as though they need an ordinal system because they fail at life.  They have no concept of ranking the performances.  Results don't always tend to reflect the performances or the judges' comments.

I could go in order, but let's cut the shit.  This season is all about Kirstie Alley and Maks.  If they keep improving, they're going to win.  Kirstie and Maks generate the most buzz and have the most followers of Twitter.  America is falling in love with Kirstie Alley like it is 1987 all over again.  This week, Maks' muscle spasmed and he fell, bringing Kirstie down with him.  Most people will say that his muscle spasmed because she is overweight, but it looks like just a nagging dancer issue.  If you watch the clip in slow motion, one can see his muscle give out.  The rest of the Rumba was great.  Kirstie is losing weight and really performing well.  Girl can move those hips.  It appears that the judges deducted for the fall because they mentioned how good it was (and it was) and then gave them 7s across the board.  Their scores will be back near the top in a week or two, but their marks were a tad WTF considering some of the dances that were given 8s.


Sugar Ray and Anna performed a bizarre Paso Doble to Bobby Brown's 'My Prerogative' and he needs to be the next one to go home.  That is really all that needs to be said.  Somehow he was only one point behind Kirstie (fall and all.)  At least we now know that Bruno likes the brothers.

Petra and Dmitry were lovely this week.  She had a lovely personal story about rebuilding schools after the tsunami.  It was very appropriate given the Japan situation.  She created some lovely shapes and really looked elegant. Unfortunately, I dread the day we will have to see her perform the Samba.  Petra isn't very memorable in terms of personality.  Unless she comes alive with persona, she will likely be eliminated when we least expect it.  Remember that Donny Osmond and Shawn Johnson certainly didn't win on dancing alone.  Their 25 (8,9,8) was impressive and deserved.

Wendy Williams and Tony Dovolani performed a Fox Trot to 'Last Night A DJ Saved My Life.'  The routine was about Wendy taking whore baths at rest stops in between radio digs.  Sadly, it looked about that clean and pristine.  The drag queen needed to go.  She was flat footed and even told us that she had two left feet.  There wasn't much Tony could do.  Poor Tony needs to get a good partner.  He did tell us that if we go to The Wendy Williams Show website, we can get a free 30-minute dance lesson at one of his studios in the tri-state area.  I may need to take him up on that.  And then we'll go get our teeth whitened.  As for Wendy, I've had enough of her wigs, bad rehearsal outfits and crying to last meet.  As Len said, ''that dance was better suited for the radio.''  The 15 Wendy received was generous.

Ralph and Karina performed a Rumba dedicated to Ralph's wife.  The Karate Kid is talented, but this dance really wasn't one of his best.  There wasn't a great deal of movement going on and there was some awkwardness.  It is has gone on long enough: we need to know what the hell the deal is with Ralph's hair.  Is it a hair piece or is he just odd looking with a flat personality?  (7,7,7)  I look forward to seeing him infuse more personality so we can see what his true ability is.

Chris Jericho may be a wrestler, but he is becoming quite the dancer.  Cheryl is working him into a dancer and he is really getting into it.  I miss Cheryl being suspected of sleeping with her partners and I hope she begins to take out her rage before long.  The producers will probably make her bitch about being in the bottom two, even though everyone knew there was no way in hell they were going home.  Cheryl's dancing was amazing this week.  Chris has a body that was made for partnering skills.  He didn't display much movement and needed to get his hands off of his hips.  There was a lack of fluidity and I definitely agree with Carrie Ann that there was some strange hip action going on.  I don't agree with him receiving the same scores as Kirstie for their Rumbas, but he is becoming a dancer and is fun to watch.  His story about his mother appeared genuine and was touching.  For a bonus, we got to see the always emotional Carrie Ann cry.  I love it when the ice queen melts.  Isn't it about time she caught a LIFT?!

Kendra and Louis performed a lovely Rumba about her love for her husband.  I wish it was about dating Hugh Hefner, but a girl can dream.  The funny thing about this was that Kendra got caught in the smoke and wouldn't let it go.  Kendra kept bitching about that smoke until they finally yanked her off stage.  Kendra's story involved forbidden love.  I was shocked that Louis didn't try to relate it to gay rights as per usual.  Louis is a top dance instructor and has done wonderful with her legs and fluidity.  Her body is pliable from all of those years on the pole.  Len did not that the gyrating was a bit slutty for a romantic Rumba, but one must confer with Bruno that 'there is nothing wrong with a good stripper!''  Kendra's personality makes one wonder how the hell she carries her own show.  Granted, she is on a network that gave Denise Richards a show.  (8,7,8)  I doubt Kendra will make the top four more and more each time they mention she is a former stripper.

Romeo has been one of the most overrated contestants from week to week, but the judges finally did point out his funky footwork.  Len got in right by giving him a six.  Romeo has a lot of emotion and can perform, but his technique is just not up to par.  Chelsie hasn't learned how to get the most out of her partners yet.  It is still all about her, which could be a result of her being a contestant on So You Think You Can Dance.  Chelsie is always wonderful to watch, but she can ask Edyta how far that got her on the show.

Hines and Kym lucked out by nailing the difficult Samba during the personal story week.  The Samba manages to trip up even the strongest contestants, but this performance was all about fun.  The '9' was a bit high, but they certainly deserved top marks for a surprisingly great Samba.  Hines is becoming a contender and Kym is truly wonderful.

Chelsea and Mark provided a memorable Cha-Cha-Cha.  The judges liked it much better than their Jive, but the attention really needs to go on Mark.  Ever since he went a bit 'edgy' last season, he has started displaying major attitude.  Mark was not pleased about last week and even rolled his eyes about having to please both the audience and the judges.  In the words of Kara DioGuardi, 'here's the thing---no one cares about you pretending to be a musician.  No one cares about your singing or guitar playing.  You're a dancer and it's annoying.  Mark totally was a better girl than Chelsea because she still has some stiff limbs going on.  Her dance was a vast improvement.  It was hot and fun.  She is likable, but note that her story was about falling in love with her and a boy writing a song for her.  It comes across a tad... um, yeah.  Mark's pseudo British accent continues to go in and out at random points, but Chelsea seems charmed by it.  Chelsea supposedly has a serious boyfriend, but her chemistry with Mark makes us all wonder...Are they...?!  (7,8,8)

Until next week!
Posted by OlympicEffect at 5:03 PM