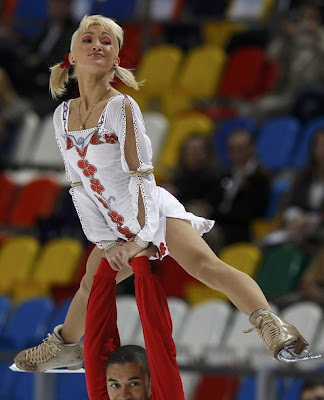 Today was the first day that mattered at Worlds.  Yes, I'm sure qualifying ''matters,'' but unless Michelle Kwan is competing, I don't feel the need to wake up at 5:30 AM.  Truth be told, I couldn't get myself up for the first three warm up groups of the men today.  I felt that sleep was more important than watching Ryan Bradley's intermediate spins.  I got up for Joubert (take that as you will.)

The American men did about as well as could be expected.  They did not fall, yet they are 11-12-13.  Note that the National Champion, whose PCS were through the roof in Greensboro, received the lowest second marks of Team USA.  Ricky Dornbush didn't have his best jump landings and he can definitely move up.  For now, these men need to hit and pray.  Hit and pray.  They can't afford to make any mistakes.  They were clean today.  Sadly, this is the best Ryan Bradley has ever done at Worlds.  I blame all of those people like FromTheBoards who told him that coming back was a good idea.  The USFSA can also be blamed for not sending Jeremy Abbott.  Even when Jeremy bombs, he would typically be better than 13th.  The federation needs to set the country up for success...and he may be the only current American capable of holding his head above water in the current field.

Patrick Chan set a World Record.  It was probably deserved.  I'm no fan of Chiddy, but he nailed that short program.  It was the best he has ever looked.  He even received two 10.000s from individual judges for PCS.  The only person capable of even challenging him was Daisuke Takahashi, but his decision not to do a quad in the short is costing him.  His Triple Axel was a tad shaky, his spins were level 3, he received an edge call on his Triple Flip and his Step Sequence was a level 3 compared to Chiddy's level 4.  Mind you, there is no way that Oda should be ahead of Takahashi given their different in performance ability.  Daisuke is THE best performer among the men (possibly since Yagudin), while Oda skates in a Miki Ando vacuum when he isn't being an adorable Asian attempt at Charlie Chaplin.

Artur Gachinski received Plushenko-style marks despite not having the skating skills of the other top men.  His success Quad+Triple combo made up for a two footed Triple Loop.  Mishin is looking more mafia than ever and Artur's marks certainly reflect that.  To Mother Russia's credit, many of the signs seemed to indicate that they thought Evgeny was the one competing.

Brian Joubert left out a combination in the short and is quite angry at himself.  The error left him with -3 GOE and he currently sits in 9th place.    Florent Amodio was half a point behind his personal best to finish 5th.  Given the likability of his free skate and the inconsistency of the Japanese, a medal is truly possible.  Takahiko Kozuka's short program may be laughable, but it was good enough for a sixth place finish.

Adrian Schultheiss failed to qualify for the long program.  He just isn't as much fun without the straight jacket.


In terms of the pairs, the Americans needed to hit in order to remain relevant.  Amanda Evora fell on her SBS Triple Toe and they currently sit in 11th place.  They don't have room for error.  Amanda and Mark have been together for several years now, but their unison could still be better.  Their skating skills are not up to par with the Russian or Chinese pairs.  The pairs field is deeper this year.  Luckily, the additional funding from the USFSA is helping Amanda and Mark too look less off-the-rack and amateurish.

Yankowskas and Coughlin are the most promising American pair since Ina and Zimmerman, yet they failed to capitalize on skating in the final flight.  It was very American.  Sadly, this year's American Team (minus Ice Dance--that's all Marina and Igor) is about as competent as Aly Raisman and Alicia Sacramone on Uneven Bars.  Even with hit routines, it doesn't cut it.  Caitlin turned out of her SBS Triple Toe, while John tripped over nothing when catching back up to her.  These two need a Russian coach to kick their ass, help them  each drop a few kilos and become more competitive overall.  The potential is there.  A summer with Oleg Vasiliev, Tamara Moskvina or Elena Valova would help.  They need a magical Ave Maria to move up in the standings.

Mother Russia did well in pairs.  They sit 3-4-5, but the promise of Volosozhar and Trankov is astounding.  Their short program was heaven.  One could make a real argument that they may deserve to be higher than the Germans.  They still look a tad 'new' during their footwork sequence, but their overall ability is incomprehensible.  If they got this good in a year, we can only imagine how good they'll be by Sochi.

Kavaguti and Smirnov continue to be disgusting.  Sasha Smirnov fell on nothing.  Unfortunately, he can't blame his fall on having to hold up Kirstie Alley.  That lack of concentration kills them by landing them in fifth place.  Granted, it is probably wrong that they are behind a Russian Team where only one of them ever leaves the ground when jumping.

Pang and Tong lead and it is a deserving lead.  They hit.  They've improved.  They'll never be Shen and Zhao, but they may become quite the skaters by age 40.

Savchenko and Szolkowy have the most potential at this event, yet their packaging remains very 'German.'

Aunt Joyce: We want the Germans to win.  They feel very Russian.
Tarasova's Mink: Yes, there is a cheapness to Aliona's look that one strongly associates with the prostitutes of downtown Moscow.

Volosozhar and Trankov shouldn't have better side-by-side spins than the Germans, yet they do.  It actually held Aliona and Robin back this time.  Their Pink Panther free skate has grown on me and they're going to need to skate the shit out of it to win.  Aliona must muster all of her fierceness and skate with a box cutter to slice through the competition.  It is going to be a close battle between Pang and Tong and Savchenko and Szolkowy for gold.
Posted by OlympicEffect at 1:23 PM