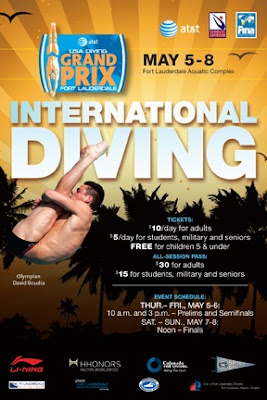 Sexy Christian diving star David Boudia is the face of May's International Diving Grand Prix in Fort Lauderdale.  Let's get this: he is so cute in his speedo that we want his as one of ours but he is pretty much married and/or too religious to get in touch with the inner spirit of Fort Lauderdale.  David recently won the 1 and 3 meter titles at the NCAA Diving Championships and was second in the 10 meter platform.

Sasha Cohen and her terrible new haircut performed on the Today Show this morning.  I fear that I will not be able to overlook this when I see her tomorrow night.  Sasha is entering NYU this May and is excited to be extremely charitable for an A-List skating party once a year for Figure Skating In Harlem.

Universal Sports posted their coverage of Four Continents on their website (for free.)  The commentary by Judy Blumberg (dance) and Tara Lipinski (ladies) is a pisser.  Tara even discusses Miki's lack of artistry (yet is sympathetic, as she herself was ridiculed in that area) and the overall lack of speed, spark, life and fluidity that is Rachael Flatt's skating.  Tara also goes apeshit on Mirai Nagasu during her short program.

Shawn Sawyer officially retired from competition to be a show skater, which is where his true talent has always been.  The IJS never rewarded his brilliance.

The MUST SEE coverage of the Ladies and Dance Short

The beautiful actress on ice named Tanith Belbin checked in via skype to discuss life on the road with Stars On Ice and her thoughts on the upcoming 2011 Worlds.  She also discusses on how Worlds being postponed and the limbo period would've flipped her out.

Kyndal Robarts on applying for a fifth season.

Yu-Na Kim's statement on her new programs.  Of course, she doesn't reveal the programs or the music cuts.  She continues to play us like a fiddle and we oblige!

Translation:
"Let me first begin with my short program, Giselle.
In this program, I, as Giselle, perform her mixed and complicated emotions.
These emptions are sometimes very intense, lovely, and sad.
I belive you can see various feelings and emotions through my performance.
So I am trying to perform Giselle focusing on her emotions as much as I can.

Speaking of my Long Program, Homage to Korea,
since this is a kind of music I have never skated with before,
I am trying to reflect on images of Korea in my performance.
As this is my special thanks to Korean fans who have always supported and cheered for me,
I am trying to express my grateful heart toward them in the program.

In the past, since I thought of results so much before competitions,
I often felt nervous and anxious about my performance.
But now, my goal is to perform my programs in the way I want to skate while interacting with the audience.
I think that goal is the real motive that encourages me."

The Women's Vault Final at the Doha World Cup

Posted by OlympicEffect at 7:07 PM