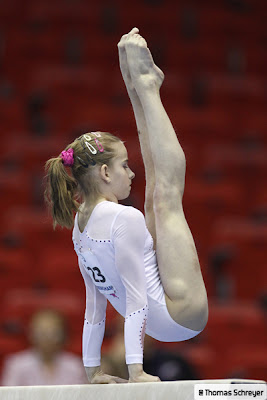 Anastasia Grishina won the qualifying round at the 2011 Russian Junior Championships with an AA total of 60.025.  Anastasia Sidorova was second with 58.650 and Kristina Sidorova was third with a 53.000.  Videos are posted after the jump.  Grishina's performance was much stronger than at Jesolo.  She continues to catch too close to the bar on her transitions from low to high and her DTY is still a work in progress, but she has upgraded floor and showed tremendous calm, fight and finesse during her bar routine.  The beauty of her work is unmatched at this time.

Mother Russia is bidding to buy to the 2011 World Gymnastics Championships before the FIG has even relinquished Japan of its hosting duties.
Day 1 of Event Finals at Doha World Cup.
The Romanians opened up their media to practice today.  Here are some better clips of the Europeans squad.


Anastasia Grishina in Qualifying at the Russian Junior Championships:


Chris Jericho and Cheryl Burke on the Gayle King Snoozefest

Posted by OlympicEffect at 12:15 AM