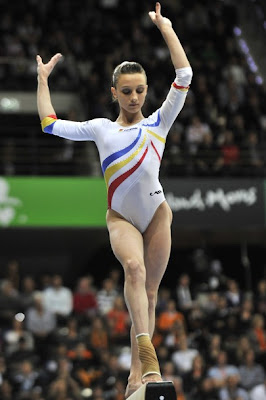 The amazing Ioana has done some translating for us again!


Due to a calf injury (other articles mention it's her left calf), only competed on 2 events UB and BB , falling on the latter.  (And, it apparently flared up once they got to Berlin.)


"It was an atypical competition, in which the girls that competed in the morning -Porgras and Racea- had off days. like some athletes might never see in their entire career. The girls perpared [themselves] well, the official training went well, but the competition wasn't the same. They were deflated; the coaches were also shocked by this showing. The evening sessions was different, with better routines. It was a competition of circumstances that led to this end result through which we lost a chance for some medals. we need to keep a clear head and a good head on our shoulders [this doesn't sound as repetitive in Romanian since you have a 'clear mind']. On the other hand, we don't need to boost our expectations to more than could be done."
more from Stoica on the VT finals --it looks like someone told Belu to shut his trap until competition's done this year --not exactly a bad idea, just about 10 years overdue. Sabou called in and asked for her career and self-esteem back because he never managed to keep quiet when it came to her, btw.
"For now it's fine; we can't talk about happiness because we're here to work. I need to emphasize that Sandra's gold medal is very important because it
is the first time Romania approaches a VT final as a sure thing. We have not medalled in this even for 7 years and one must appreciate the coaches' focus on this event compared to the prior coaching team."
Posted by OlympicEffect at 11:52 AM