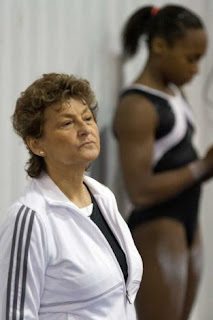 Videos to come later.  So far we know:

Martha Karolyi plans to stay on post London (which we've known), but she will have a National Coordinator for development.  That is rumored to be Zmeskal.

Kathy Kelly, arguably a bigger and more important bitch than Martha, is retiring after London.

Nastia is still planning on NYU for sports management in January.  I expect photos of her with the Lipinski, Cohen, Bloom and Hughes socialite crew in no time.  Martha wants to see a full bar routine from Nastia.  She says the 'very good' one is needed at Trials.  Rumor is she needs about a 16.000 at Trials to make the team or else Kyla Ross is going.  One never knows with Martha or USAG scoring.  If Martha is feeling nasty, one could see her getting fed up with Maroney if she misses beam or floor.

Bridget Sloan will either vault an FTY or a DTY.  She 'thinks' her bar routine starts from a 6.6.  Good for Bridget to 'think.'  I live for her laid back attitude.  She is my dark horse pick for third alternate.

Kyla Ross will NOT be upgrading her beam dismount (there's a shock.  No one upgrades after this point.  Remember those Amanars that never materialized in the summer of 2008?)

Maroney will do AA here.  Martha says she needs to contribute on more than one event in London.  Maroney is capable of being solid on floor, but she is also capable as being a white knuckler.

Alicia started training floor a few weeks ago but isn't in routine shape yet.  She can do all of her passes, as she hasn't upgraded in a decade.  The one upgrade she made, the piked double arabian, she ditched.

Wieber will not be doing the double layout on floor this year.

Finnegan has struggled with vault as of late and will stick with a DTY this year.

Anna Li and Casey Jo Magee are planning on sticking around post 2012.