Off Balance: A Review 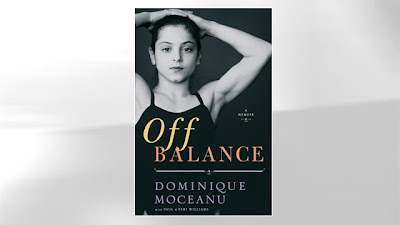 If gymnastics were US Weekly, it is without a doubt that life and times of Dominique Moceanu would've been splashed across its covers more than any other gymnast of her generation (and perhaps, ever.) Talented, beautiful, charismatic and coached by Bela Karolyi, Dominique Moceanu had it all. She is also gutsy, opinionated and speaking out in her new memoir Off Balance.

The memoir, just 256 pages of it, had the potential to be one of the greatest sports memoirs of all time. It will not go down on par with Andre Agassi's revealing book, but the memoir is a candid and worthy read. Given the intense emotional nature of the book, I would not recommend having it be a fun beach read unless you prefer to read it with a glass of wine (and box of tissues for some.)

Dominique Moceanu's life was planned by her father Dmitru. She didn't have a choice. Given their Romanian heritage, only one coach was ever good enough: Bela Karolyi. Dominique has been publicly critical of the Karolyi system ever since they denied her entry to the 2006 VISA Championships, but the feelings stem from so much more. As Dominique has slowly revealed in interviews over time, the Karolyis were only her coaches for brief periods during her career: December 1991-Barcelona and June/July 1995-August 1996 with a brief few months in early 1997. The pervasive attitude in the media (as voiced by Christine Brennan and Bryant Gumball) is that Dominique got to be where she is due to the Karolyis and keep her mouth shut about the methods used to get there because the end justifies the means. This notion is a bit skewed: the mainstream media is not aware that Bela Karolyi has a limited technical knowledge of the sport of gymnastics. His gifts lie in physical preparation, conditioning, managing, polishing and packaging.

There is a different look to Dominique Moceanu's gymnastics than the stronger, more powerful likes of Retton, Zmeskal, Strug, Grivich and Durham. There is a reason for this: Alexandr Aleandrov was responsible from taking Dominique from a new junior international elite to a national champion. The style and technique Dominique displayed in her tumbling, on vault, on bars and in her skills and series on beam is a direct result of this influence. Martha Karolyi did not put the same beam elements in the routines of her other gymnasts because she didn't teach them. I was taken aback when Dominique told me this during an interview I did with her in 2007. I wondered if she was just suffering from sour grapes. What I did find was that Alexandrov was indeed there and Martha's typical routine constuction supports this claim. One look at the Six Pack and one will find that Martha's beam routines involved: a series (back handspring to two layouts), leap series, high light skills (standing layout stepout to one foot for Grivich, back pike to two feet for Zmeskal and full twisting swing down for Stokes), and a dismount. It is even possible that these skills were taught by other coaches during private lessons. (This also destroys the The fact that the head coach of the '92 Soviet Team was employed and coached there had a little something to do with it.) Dominique's variations of back dive ¼ to handstand, back handspring to three layout stepouts, full twisting double layout off bars, full twisiting double layout, etc were all skills being performed regularly by the 1992 Soviet Team. Alexandrov also taught her a double front, a very popular Soviet skill, which Dominique was too injured to perform in the Atlanta Olympics.

One of the greatest revelations made by Dominique Moceanu is that the Karolyis never thought much of her or her family. They were poor immigrant pawns to be disposed of. It is also clear that the Karolyis have disdain for her, but it isn't clear why until you break it down.

If there is a downside to Dominique's book, it is that it leaves you wanting a bit more. She does not discuss being forced to compete in 1997 well out of shape, or her comeback attempt in 2000. It would've been interesting to read about returning to the camp system only to have Bela tell her and the media that she was grossly out of shape. While it was true, he was anything but polite about it. Dominique's take on the 2000 Camp System would've been enlightening. She does not go into detail about every competition or performance, nor does she discuss her teammates in excessive detail.

Unlike Amanda Beard, the reader puts down Dominique Moceanu's memoir with a better understanding of the gymnast who just won't shut up about the Karolyis. While many in the gymnasts community, like John Geddert via Facebook, wishes she would go away as it is the sport's turn to take center stage, it is clear that she has more insight into gymnastics than many give her credit for. At the end of her feature on Bryant Gumbal's Real Sports, Bryant dismissed Dominique's claims about the Karolyi method because she hadn't produced an Olympic Champion of her own in a non-Karolyi way. The truth is, Dominique already reached the top another way: twice.  It is true that Dominique may never have been quite the same media darling with Bela Karolyi's bluster, but her talent, beauty and charisma have always found a way to the top.
Posted by OlympicEffect at 3:42 PM