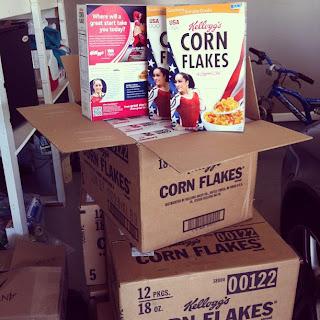 Jordyn Wieber makes the cereal box BEFORE the Olympics.  Shall our Jewish superstition take over?!  What would Jill Zarin say if it were Ramona's daughter?!  Congrats to Jordyn, as being on a cereal box is indeed making it.

There have been rumors surrounding an eye condition to Lambiel that could keep him out of shows and prevent him from choreographing.  A closed Lambiel Facebook group (info is allowed to be shared) reveals that Peter Grutter told a journalist that Miki Ando has arrived in Switzerland to work on choreography and that Machida will come on July 8th.

Note that David Boudia says he prefers bottles.  He has previously tweeted about peeing in them when stuck in Indy traffic.

Troy's diving is getting better with age.  If he doesn't head case it up again, he could medal at these Olympics...at least in synchro.  He is currently in second after prelims in the 3M Springboard.  Our former hottie could use some botox.  I've always enjoyed Justin's aesthetics more and frankly, he is aging better.

Shawn is an amazing bullshitter.  This is why she is more of America's sweetheart.  She is just so good at answering these questions for the mass public.
Posted by OlympicEffect at 8:16 PM