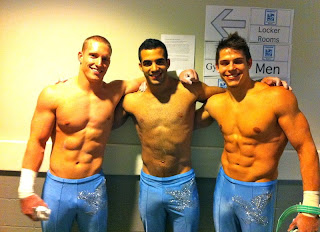 Because Aunt Joyce has not yet arrived to the office, Margaret Thatcher will provide a British perspective on the men's artistic gymnastics Olympic Trials. Having spent time fighting Argentina, I am an astute observer of Latin American history and hunky Latino tops.

Ay papi! The muscle daddies are off and running. 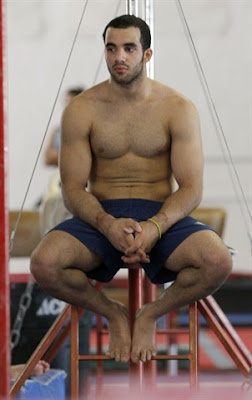 With an unfortunate floor performance, Danell Leyva has let down Gloria Estefan, Elian Gonzales, John Secada, and everyone watching this to see him in those shorts.

As they say in the Bronx, the handsome John Orozco ha convertido en un hombre activo y puede dominar a todos los chicos de esta tarde. The boys in London may find themselves on the receiving end of the powerful thrusts and swings of America's Bronx boricuo champion. However, according to Al Trautwig, we are only tuned in to see John wave to his parents who dodged bullets to be here.

Sam Mikulak demonstrates his Czechoslovak beauty every time he breathes. Do we care how well he landed his triple Tsukahara? If USA Gymnastics will not have him, I am certain BelAmi will. 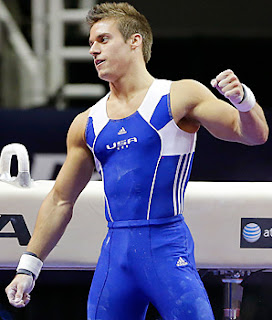 One more hit for the daddies. Steve Legendre rocked his high bar for the hell of it.

For a change of pace, one of the bottoms showed how well he can keep his legs together on pommel horse.

Orozco landed a wonderful Kristie Phillips vault. That should not have been stood up, but this man is a fine gamer.

J Ho Horton is looking sinewy as he tries to uphold the tradition of American power bottoms. Chris Brooks achieved a broadcast highlight with a strong double front pike on vault.

The NBC trio is consumed by their knowledge of the selection process (which happens to be not particularly deep or interesting). They forget the audience who could use information about the athletes and indeed the sport.

Poor little J Ho just hurt his cause on highbar.

This broadcast has come down to a question of leadership. Can J Ho fill the void as the team's most experienced bottom? Ooops that floor mistake was a hot mess. 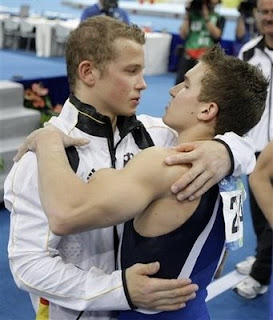 Leyva ended the day by showing that when the chips are down, you should always send in a muscular top to complete the job.

As the chalk clears, the gymnastics officials are announcing that we have one team with one dream. The bottoms have been vanquished, but they must now join hands with the muscle daddies and take on the world in London.

Posted by Margaret Thatcher at 1:11 PM