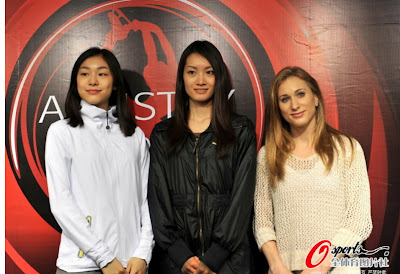 As Yu-Na Kim arrives in Shanghai for Artistry on Ice, there is buzz that she will announce her competitive future at the end of this summer.  While Yu-Na initially was relieved to be done with competing after being burnt out after the Olympics, one has to wonder if there is a chance she will return.  It was once unthinkable that she would. What could her motives be?

1.  She is young, still trim and still able.  Yu-Na has not had her body rebel on her since retiring.  While she wasn't as svelte in 2011 as she was in 2010, she was still in fighting form and very close to a World Champion-level of skating without preparing fully.

2.  Yu-Na is a competitor and though she was burnt out, absence makes the heart grow fonder.  Competitors often hang up their skates and leotards after the Olympics only to feel the itch to come back again years later.  They are often lost in their post-sports lives for a few years and feel the only thing that can bring stability, normalcy and happiness is a return to training and competition.  Yu-Na Kim has been very busy with UNICEF, the Youth Olympics and South Korea's Olympic bid in addition to her skating shows, but she does not have a consistent schedule like she did when training.

3.  Coming back makes enormous financial sense.  When you're an Olympic athlete, the pre-Olympic endorsements are often was as much or even more than the ones following a gold medal.  One can look at Shawn Johnson's endorsement success this year.  With Yu-Na Mania hitting outrageous fad levels, it was only a matter of time before her public image to a hit in South Korea.  As she was no longer winning gold medals and kicking the asses of Japan's top skaters, it was inevitable that their excitement for her would cool.  If the excitement dwindles, so does the money.  Should Yu-Na return and be competitive, the excitement would ignite the mania once again and could extend her marketable career considerably.  That level of fame and success can be suffocating, but it is also addictive.  It isn't easy to deal with backlash.  Returning to competition would quell the talk of lawsuits for slander and hits in the media for endorsing beer and being blamed for the public's problem with alcohol.

4.  Yu-Na didn't jump in shows for several months, but recently returned to jumping in All The Skate's Spring show.  It is likely that she missed jumping and feels as though it is possible to get her jumps back consistently.  Yu-Na Kim is one of the most impressive talents the skating world has ever seen.  If she can get her inner fire back, her body will follow.  If she is willing to put herself out there and go after competitions with nothing to lose, she has enough time to get back in shape this year for a return to the Grand Prix before the Olympic Games.

While Yu-Na may just formally announce her retirement, I wouldn't be shocked if a comeback is in the works.  Stranger things have happened.
Posted by OlympicEffect at 11:09 AM