The Curse of 'Too Good Too Soon' 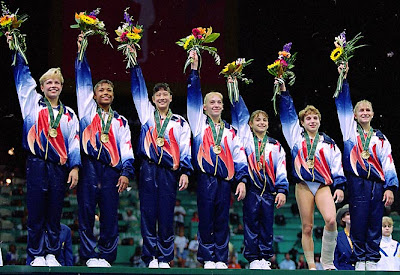 Team USA looked like the Olympic Champions at this weekend's National Championships.  While many are excited about the girls taking their place atop the podium, it probably isn't such a good thing.  For the girls trying to make an international team, it is always best for their mental and emotional state when the results select the team or the performances make the selection decisions glaringly obvious.  This will keep the therapy bills down later in life.  While that is all rainbows and butterflies, a degree of uncertainty and intuition tends to lead to greater results.

Back when the Magnificent Seven won gold, Shannon Miller and Dominique Moceanu were ranked first and third in the country six to seven weeks before the Olympic Games.  Three weeks before competing compulsories in the Georgia Dome, they were sitting in the stands while many coaches on the floor were spreading rumors and speculating whether they would even be able to do their sets given their injuries.  A year ago, McKayla Maroney did minimal gymnastics at the final selection camp and wound up coming up big for Team USA in Team Finals and won an individual gold on the vault.  If the 2011 team was chosen live on television based on the performances done at camp, she wouldn't be on the team or she would've done much more gymnastics and possibly not been as healed or as rested and primed to peak at Worlds.

Now, like when we approached the 2008 Olympic Trials, the team is all but chosen based on the gymnastics.  With quite a ways to go until the gymnastics compete in London, it isn't a good thing.  Every year, gymnastics gets more difficult.  The routines put greater strain on the human body.  Between now and London, the girls are going to be doing a ton of hard landings and intrasquads.  It is going to be mentally and physically taxing.  Chances are, with all of that strain to come and all of the strain already endured to get to this level of preparation, someone is going to get hurt.  Overall, the obvious five of Wieber, Douglas, Raisman, Maroney and Ross already have a greater hit percentage shown than the Magnificent Seven did at 1996 Nationals.  They are about where the girls were at Trials.  Dominique Dawes was a wreck in training and compulsories at the 1996 Nationals.  Kerri Strug missed her beam mount in Optionals.  Shannon Miller fell off beam.  Moceanu had errors on several exercises.  Jaycie Phelps even sat down her beam dismount at Trials, while teammate Amanda Borden's double arabian on floor left many with white knuckles.  Amy Chow didn't compete Optionals at Nationals due to back spasms.  The routines were easier back then, which made it easier to come back, but it also exemplifies that a few more question marks would be good right about now.

Frankly, the gymnasts of this team are approaching their peaks.  Instead of debating who is making the team or speculating who has a shot, team finals lineups are being debating and many are already in the mindset of debating the top two mindset and whose Amanar and floor routine should be benched in prelims.

We have seen this before.  The Karolyi gymnasts were burnt out by Barcelona.  In 2008, Peszek and Memmel looked at their best at Olympic Trials.  Memmel had whiplash at the selection camp and both were injured by Trials.  Sacramone weakened physically and mentally throughout the process.  Shawn Johnson was relatively sharp throughout, but perhaps a tad sharper for Trials than the Games.  The two gymnasts who performed the best at the Olympics compared to what they were capable of: Liukin and Sloan, were the most unsteady at Trials.  Liukin finished in the top two thanks to a huge bar score, but she missed one bar set in Philadelphia and was committing errors on floor.  At Nationals, she was still falling on her double front.  Sloan was the sixth gymnast on the team and her performances only justified her position at the eleventh hour selection camp.  She performed better than she ever had in her career in Beijing.

In many ways, the concussion to McKayla Maroney is a blessing.  While it keeps gymnasts like Bross and Liukin in the mix should the five Amanar strategy not pan out, it keeps a well-needed question mark in the air.  Prior to her concussion, the question was whether or not her floor routine was strong enough to consider her a two event gymnast and if someone like Elizabeth Price should be selected for the top five who could actually do two events.  That won't happen, but it is a cute notion.  Maroney's third pass was not ready until Team Finals at Worlds when Alicia went down after looking extremely strong at Classics, Nationals and the lead up to the meet.  Maroney delivered a peak performance on floor.  She was already at the point where her third pass was the last thing to worry about.  She isn't even vaulting her best Amanars (and hasn't all year by her own outrageous standards), but she is far and away the favorite for gold.

Maroney's concussion opens a lot of doors.  The team is going to be selected at Trials.  That isn't ideal when a bit of murkiness tends to help out.  The Russians are not going to look as good at the Russian Cup as they will at the Olympic Games.  Their top guns will likely not even do their Amanars until smaller intrasquads and possible outings before the Games.  Now that Maroney has a concussion, she cannot perfect her floor routine as well as she would've been able to prior to Trials.  While it probably will help her Olympic performance, it could lead to a bit of mild controversy in three weeks.  Maybe not controversy per se, but definite grumbling.  Concussions are a bitch.  They are even worse when you have to do a three and a half twist on floor.  The days out of the gym could lead to an uneven performance by Maroney at Trials where she will be selected by potential and past results.  There are rumors the USOC sees her as a lock for individual gold and is dying to have her on the squad.  If Maroney were on crutches days before the Games, she would probably still be worth giving every benefit of the doubt due to her enormous talent.  That same benefit wouldn't be afforded to someone in a lower ranked spot on the team.  Nor should it, unless we are talking about fairness, which success in gymnastics has never been associated with.

Martha Karolyi and the selection committee have kept everyone with a chance (and Sabrina Vega) in contention.  Aside from Chellsie Memmel, anyone with a prayer of making London will be in San Jose.  It was a smart decision.  The girls from WOGA may have faltered, but they showed potential unlike an Amanda Jetter or Mack Brannan.  Bridget Sloan, who looked to be lost in her floor music throughout the weekend, will likely pull a strong floor routine out of her ass.  It remains unknown what Nastia can do on bars.  When you're a finesse gymnast, comebacks are slower than they would be quick twitch Dominique Dawes.  With her back against the wall, Nastia may be able to do a bar routine at Trials, but it is unlikely to be at the level of Maroney.  The way she would make the team would be an injury to someone else or the selection committee seeing what she is doing and where she could be.  Frankly, that is a best case scenario.  (And stranger things have happened.)

Given the injuries, it is best to keep all of these girls going.  It would be ideal to not name a final five until a week before the Games, but that won't happen in America.  Now should be a time for tweaking.  It should be time to put Wieber's beam routine back to avoid any potential start value questions or potential errors possible to commit trying to make a fruitless side aerial+side somi combination.  It should be a time for wondering who will hit, not already knowing who is and who will at Trials only to be burnt out by London.  Frankly, the girls look like Olympic Champions and that is just too good for June 10th.
Posted by OlympicEffect at 8:52 PM