The fourth episode of Breaking Pointe airs tonight, but it has been a while since we've sufficiently discussed the stars of Ballet Meets The Hills.  Last week's episode gave hope that they may be able to turn the series into more of a summer hit that could grow into another season or two.

Last week, Allison struggled with not getting the role she desired, yet being cast as Adam's bitch for Paquita.  Basically, she had to learn multiple roles with insufficient rehearsal time and had a crazy exacting Russian demanding perfection from her.  Allison meets a crazy Russian with insufficient practice.  Does that sound staged by Adam Sklute and producers to you?  We've gotten to know a bit more about our diva: her parents divorced and caused her to quit ballet for several years, which is why she is behind in terms of other girls her age, yet actually has a job at Ballet West and is still considered for roles by Adam.  It is also why she is so unwilling to commit to her Osmond boyfriend.  Of course, this vulnerable diva is also a major faghag who is on the hunt for a man for resident token gay Tom Mattingly (unless the other pretty boys are repressed.)

Beckanne Sisk and her 'fat feet' beat out Allison for the solo in Paquita.  In case you didn't know from one of the twenty times an episode she mentions it, Beckanne is nineteen and it is amazing that she is getting these roles.   It is amazing, except for the fact that the brightest stars are always plucked from graduation and advanced through the ranks at lightning speed.  There are times when Beckanne does seem like the resident sweet Shawn Johnson character and then you understand why the other girls hate both of them, as we learn that she is a bit smug.  Paquita is just so easy for her, which she just happens to mention as Allison is sucking up another rehearsal.  Mere editing?  Who cares, it was delicious.

Hot tool Ronnie got his tattoo touched up with his seemingly butchish sister whose name appeared to be She-Ron.  I guess we know who the favorite in the family is.  He was shirtless and far more arrogant in his audition than Rex, who has superior lines, yet has been beaten down in life and needs more attack.  Christiana was also beaten out for her role, though she appeared quite competent in her audition.  It was unclear why her principal husband wasn't being considered, but it made for good TV.  Ron does not enjoy Rex, though it is unclear why.  He will probably just fume and rip his shirt off over it.  Totally fine.

The most delicious scene of the episode happened when Beckanne went to dinner with the soloists and principals.  The girls ordered shots, which she is too young to have, and all discussed how they eat potato chips and croissant sandwiches before performances.  While it was clearly a "there are no eating disorders in __________(ballet/gymnastics/skating) moment, I couldn't help but notice that one of the main girls making such claims was in desperate need of Crest White Strips to cover up her bulimic teeth.  Love. It.  Every second of it.  The producers did show us Allison and Christiana's ballet feet while getting mani-pedis.  A delicious moment.  I wonder if ballet dancers get that second protruding ankle bones that all skaters get?

We can only hope that we get to witness Allison being tortured by Elena again in tonight's episode.  Have you ever had the worst day of your life in practice only to be tortured by a Russian who doesn't care?  God Bless the Russian women.  They are always such sweet bitches. 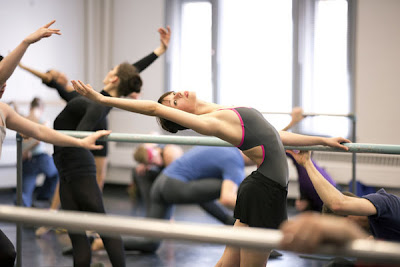 We have yet to see much of Katie or her Osmond brother, but we did see her make the ultimate girl faux pas where girls and their best friends dream of marrying brothers, living next to one another and timing their Mormon/Christian children at the same time.  Luckily the Tilton-Osmonds seem all for it.

How the heck does Allison fit in with that family?  We need another season to fully investigate.
Posted by OlympicEffect at 11:05 AM