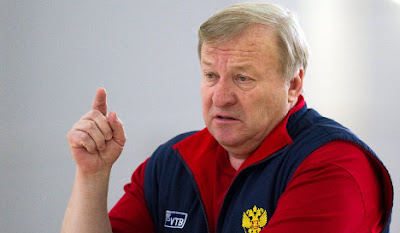 (Note, "the jump" is referring to the vault...for the screw into the hole.  (Mustafina is doing her Amanar)

ROUND LAKE (Moscow Region), June 8 - RIA Novosti, Alexander Vladimirov. Silver medalist in the 2011 World Uneven Bars, world champion in the 2010 team all-around Tatiana Nabieva returned to the location of the Russian national team in gymnastics, and continues to prepare for the Olympic Games , said the agency "F-Sport" Senior national team coach Alexander Alexandrov.
The crucial pre-Olympic start - the Cup of Russia, which is determined by the national team at the Games in London will be held in Penza, from 11 to 17 June.
"She is training with us, will speak at the Cup. Problems with weight is almost solved. It is, in general, in working condition. Train is ready, a couple of months ago there was a problem with it, but now everything is all right," - said Alexander.
The coach also said that the world champion in floor exercise Xenia Afanasyev, who missed the European championship, continues to train is not at full strength.
"Xenia was injured ankle, which it now worried. Hope that everything will be fine for the Cup, it will act. It is not going to do full program, but it starts jumping acrobatics", - said Alexander, adding that the injured were treated conservative, non-invasive methods.
Vice-world champion in all-around Victoria Komova, according to coach, to the Cup of Russia must come to an optimal form.
"Now she is much better trained, almost regained its entire program. Aliya (Mustafina) also makes it almost the entire program, except for the jump. Long and Wick, and Alia leap 2.5 in training version of the screw into the hole," - said Alexander.
The coach added that another Russian team mnogoborki Anastasia Grishina recently began to ache a little leg. "But we are doing everything we can. It is not clear why. No falls were not. Arrived from Sochi, the foot was disturbed," - concluded Alexandrov, expressing the hope that soon the injury would not make themselves to know.

Posted by OlympicEffect at 11:15 AM