NBC: As Tacky As Ever

This morning, Ann Curry announced that it was her final broadcast as co-anchor of the Today Show.  It was perhaps the worst-kept secret in television that she was being replaced by Savannah Guthrie.  The ratings have dropped for Today and GMA is narrowing the gap, even winning some weeks. Changes need to be made and Ann Curry is seen as what has changed.  Perhaps it was never meant to be.

Successful female co-anchors on Today all have one thing in common: they are alpha females.  Katie, Jane, Meredith and Barbara are all strong women who didn't always get along with their co-anchors.  There are rivalries for control of the broadcast, better segments and whatnot as one's career is always at stake.  It is not a secret that Matt Lauer, the twenty-five-million-dollar man, viewed their chemistry as the issue and Ann as the weak link. 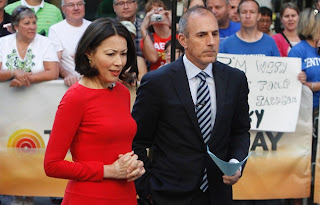 Ann is not as quick or as witty as Katie or Meredith.  She is never going to do duets with Tony Bennett or be more concerned with her legs than hard news.  Granted, she is serious, compassionate and earnest.  Ann is the type of reporter who will go to the front lines and be able to capture to emotion of children in a war-torn area.  She is someone you'd want to talk to on your death bed.  She is not ideal for Today, which continues to slide continually toward entertainment journalism.  They half hours used to dictate severity of the news, but the Kardashians have managed to infiltrate the top of the hour, and that is a problem for society and all of journalism.  The Today show has become a giant platform for discussing the fashion trends of Kate Middleton.  When the editor of People is commenting more than once a week on a news program, there is a problem that extends far beyond Ann Curry.  There are institutional issues with the broadcast that are tired and in need of remedying. 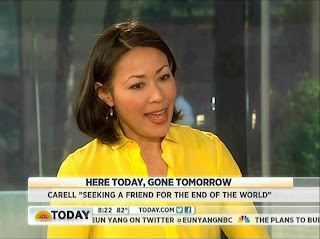 NBC has reason to replace Ann, but they did not do so with the class or grace they pride themselves on having. They leaked her replacement to the New York Times (after months of rumors) and caused a spectacle of watching a train wreck in order to attract attention to the show.  Will Ann be fired today?  Is Matt being fake with her?

Ann may be better suited in another role, but Savannah Guthrie is far from the alpha female character they desire.  She, with her long legs and tall shoes, appears a bit awkward on screen.  Savannah has yet to relax, though there is some potential.  Savannah will not glide in with the star power Saint Meredith brought to the program.

I respect Ann for not pretending she was on her own volition, yet maintaining class and dignity.  The most intriguing part came when the other members of the broadcast gave their rehearsed farewell comments.  Ann did not look at Matt as he spoke. Matt mentioned, "you have the biggest heart (and I got you fired) and you'll be at the Olympics with us."  I lived for the Olympics comment, because when you are getting fired on national television, reporting at the Olympics is hardly a consolation prize.  We do know Matt and Natalie have fond memories of the Olympics.  They'll always have Torino.  Ann did appear to have a genuine moment with Al Roker.  She appeared disinterested in Natalie's comments, merely wishing for the moment of awkwardness to be over.

Ann deserved better.  NBC is just not accustomed to that.
Posted by OlympicEffect at 10:39 AM