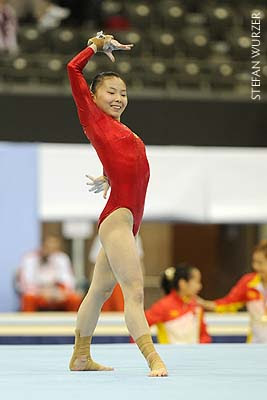 Podium Training is underway at Worlds and it has been up and down for all teams. Martha Karolyi and Nastia Liukin took in Mother Russia's hot mess that was podium training, but the bitches were looking somewhat stronger during today's workout. Almost every member of Team USA mentioned that there were many mistakes made today. If you read the reports and listen to the interviews, it becomes apparent that Mattie Larson is as inconsistent as ever on beam and even landed her double pike on her hands and knees during her full floor routine. For many of the teams, it is definitely feeling like prelims is still three days away and then finals days after that. There is time to adjust and everyone is certainly running through mud along the way.

The Rotterdam Worlds website has quite the blunt reporter and I'll post highlights from the reports. Other reporting and compilations of reports is available on the Gymnastics Examiner. It has Team USA's podium training notes and Mother Russia's second workout.

China:
China were the group to watch in this subdivision, and they didn’t disappoint. The reigning Olympic champions produced some good work on all events, although some of their Olympic veterans looked a bit shaky. Jiang Yuyuan, who missed most of last season due to injury, produced some good work on bars but looked shaky on the other events. She kept falling on her 2.5 twist to layout front on floor, sat down some beam dismounts and had some scarily low landings on her other tumbles. She did manage to land a few double-twisting Yurchenkos, but not without some major deductions. Deng Linlin was similarly shaky. She didn’t wear any bandaging, but looked badly in need of it, wincing after each hard landing and limping after each vault. For her part, Olympic bronze medallist Yang Yilin, who also sat out most of 2009 injured, looked fairly solid on most events, and showed one of the most beautiful floor routines of the day. She landed one double-twisting Yurchenko but fell on another one. The fall obviously hurt, for she cried for about half a minute afterwards. One has to worry about Yang’s health at this point – she was wearing bandaging on both ankles, one knee and one wrist, and has only just recovered from a serious back injury. It’s a miracle that she’s here, and looking good to boot.

China’s star today was Huang Qiushuang, who has a reputation for being a headcase, but looked extremely confident today. Huang hit nearly all her sets, and was probably China’s most consistent worker. She was also the only Chinese gymnast to practise vaults from two different families (double-twisting Yurchenko and piked Podkopayeva), which would seem to indicate that the Chinese intend her to qualify for the vault final. Sui Lu also looked very solid, especially on beam. She did not do the piked Grigoras salto she recently unveiled at the Chinese nationals, but hit her piked front and tucked Grigoras with ease. He Kexin looked confident as ever on bars and showed some nice (albeit not terribly difficult) work on floor and vault. Her floor exercise, which she presented with great gusto and a dazzling smile, was quite a hit with the small crowd of judges and gymnasts who had shown up to watch the team train. For her part, Wu Liufang looked cool and collected on the three events she did, and made a strong case for a spot on the team. She certainly looked better today than either Jiang Yuyuan or Deng Linlin, despite having been appointed team reserve.

Japan:
Japan were the class act of this subdivision. 2009 world medallist Koko Tsurumi was having an off day, making serious mistakes on all events and looking distinctly unhappy with her work, but the rest of the team did a great job. Momoko Ozawa hit some good 1.5-twisting Yurchenkos before finishing off Japan’s vault session with a successful double. Mai Yamagishi also hit some lovely 1.5s. Japan also looked strong on bars, where all girls showed terrific lines and swing. They had some problems with their dismounts, but looked terrific as long as they were on the apparatus. On beam nearly the entire team showed piked side saltos, a more elegant version of the generally ugly tucked side somi. Most girls hit their acro skills and jumps, only to falter on their full turns (Koko Tsurumi did not hit a single L turn). They also had considerable trouble landing their dismounts – especially Kyoko Oshima, who really struggled with her 2.5 twist. On floor, Rie Tanaka showed the most crowd-pleasing exercise of the morning, with decent tumbling and very expressive dance. She seemed to really enjoy herself on the floor, which made her a joy to watch. Momoko Ozawa also impressed with great tumbling (double straight), but struggled a bit with her turns. All in all it was a pretty good session for Japan. If they sort out their dismount problems, they should have no trouble qualifying for the team final.

Australia:
Australia walked into the arena and into a terrific bars session. Routine after routine was nailed. Larrissa Miller, a World UB finalist last year who faces potential reserve status, performed exquisitely on bars and stuck her dismount twice. The three Australian Georgias (yes, there are three!) all performed beautiful bars sets. Lauren Mitchell performed cleanly on what is her weakest event. She followed it up with excellent beam sets, nailing all her skills. Her floor was solid, as well, although she stepped out of bounds on her first pass and couldn’t even do the stag jump with which she usually ends the pass. Emily Little, Australia’s upcoming star, also trained brilliantly, performing solid, hit routines repeatedly and performing high, clean double-twisting Yurchenkos on vault. Georgia Simpson, an elegant gymnast who possesses a natural gift for dance, soon became the many photographers in the arena’s darling with her exquisite execution. It looked almost as though she had been watching some YouTube videos of Nastia Liukin! She even had the flick of the ponytail and the stare down to a tee!

It remains to be seen, of course, if Australia’s younger team members can withstand the pressure of a world stage to garner a great team result, but they should certainly qualify to the next to the next worlds with room to spare!

Mother Russia:
Russia were having a bit of shocker. On their first attempts at their Amanar vaults (2.5-twisting Yurchenko), both Tatiana Nabieva and Aliya Mustafina landed on their bottom. Their second attempts proved more successful. Mustafina did a good job on bars, catching all her releases without a hitch, but showing some ugly leg form in her giants, especially the ones before her dismount. Nabieva on the other hand was having a rough time of it, missing her unique toe-on to layout Tkatchev three times in a row. The fourth time, she actually managed to finish her routine, to loud cheers of her teammates. She then proceeded to have a disappointing time on beam, as well, falling on a back salto and landing her dismount with her head at knee level. Ksenia Afanasyeva showed a near-perfect beam routine with just one small wobble, but the rest of the team all suffered falls. Floor was a veritable splatfest for the Russians, who had great trouble sticking their landings. Literally all the girls fell on at least one pass, with several girls falling more than once. Nabieva en Anna Dementieva were having such a depressing time of it that they actually cried afterwards. Nabieva received a massive scolding from one of the coaches in the corridor. She obviously wasn’t happy with her work at all. It is to be hoped that Russia will get their act together before competition begins, as a performance like yesterday’s will not see them crowned champions – which would be a pity, given the amazing talent on the team.

Great Britain:
Great Britain continued what has been a strong week in training. Many of the girls showed wonderfully stuck double Arabians for their first pass on floor, the standout being perhaps Danusia Francis. Imogen Cairns proved why she just won a floor medal at the recent Commonwealth Games, nailing her tumbling, including a triple twist. For her part, reigning world champion Beth Tweddle performed a good, strong floor routine to new music from the Sherlock Holmes soundtrack. Interestingly, she no longer leaps out of her tumbles. Britain went on to do well on vault, where Beckie Downie landed several double-twisting Yurchenkos, although she also botched a few. On bars, Beth Tweddle only competed six of her seven flight elements, omitting her Markelov. Although she seems strong, she had a nasty cough during training. Danusia Francis performed a bars set with three flight elements in a row, and nailed her landings. Francis also performed solidly on beam, her strongest event, and stayed on longer than anyone to perfect her dismount. Jennifer Pinches was in tears after a bad landing on her 2.5 twist dismount, but seemed OK afterwards. Nicole Hibbert performed well all night, as did Beckie Downie. Hibbert also kept onlookers entertained with her hilarious calls of support to ‘Come on, kiddo, get your feet over!’ and ‘Looooove it!’ Judging from podium training as well as regular training, Great Britain have great potential to do well in the team competition, as long as they can hold it together under pressure.

P.S. You know things are a hot mess and a race against time when Bridget Sloan starts explaining to us what 'podium training' is. It is loads of fun guessing what kind of days each American had based on their interviews. Looks like Bross will definitely do all four events.
Posted by OlympicEffect at 9:59 AM