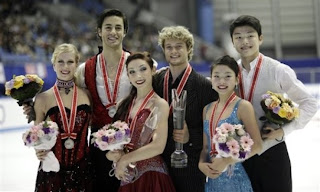 When it comes to the dance events, I often find them more intriguing for the political landscape they cultivate over the course of the season rather than the actual dances themselves.
As our Canadian commentators not-so-subtly remarked, with Virtue/Moir sidelined for most of the year (and certainly all of the GP series), NHK marked the first event in which Davis/White could conceivably stake their claim as the clear number ones. A dominating performance on the GP circuit could theoretically solidify this standing heading into Worlds.
It reminds a bit of Lu Chen vs. Michelle Kwan during the 1995-1996 season. Chen’s inconsistent performances all GP season long were a stark contrast to Kwan’s string of GP wins. And on a night where both skated near flawlessly, the judges gave the World title to Kwan. 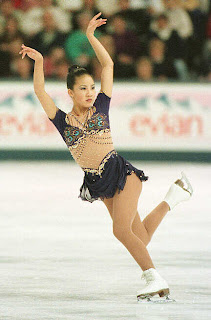 And before I get a litany of people pointing out the obvious, I will state it myself: YES, I realize it’s an imperfect analogy. That’s not the point; no pattern is unimpeachable. It’s merely a yardstick to measure what we think might happen in the future. Point being, the door is now open for Davis/White to assert themselves as the leaders. Is NHK the first step they took in stepping through it?
NHK Trophy marked the GP debuts of Elena Ilinykh & Nikita Katsalapov and Maia Shibutani & Alex Shibutani.
For I/K, their senior debut comes on the heels of Domnina/Shabalin's retirement. Certainly there has been plenty of speculation as to whether or not I/K will ascend to that all-important political position of Russia's #1 or if it will be a team like Bobrova/Soloviev or even the has-yet-to-compete Khokhlova/Andreev. Hey, stranger things have happened.
In the case of the Shibs, their lower-than-expected (fine, lower than some were expecting) placement at Junior Worlds last year (coupled with the increasing scrutiny on their height differential) had left a lot of questions as to how they would fare in the leap from junior to senior. And with Samuelson/Bates out for the season, one could argue this heightens the stakes for the remaining non-Marlie teams who will be fighting it out for the position of USA #2 and USA #3. 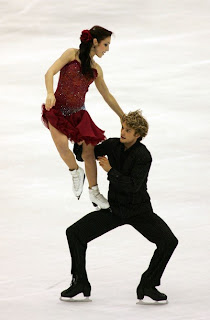 First place: Davis/White - First in FD (98.24), First Overall (165.21)
A deserved landslide victory in both phases of the competition. There was much to admire, and certainly the difficulty of those lifts bears mentioning. I'm of mixed mind about this program. It still feels like a work in progress to me (as well it should), and I don't think it yet tells a cohesive story. I preferred the refinement of their SD over the sultriness of their FD.
Marlie skating to a tango sounds all kinds of awesome in my head, but then I hear the cuts of "Il Postino" and "Forever Tango" that they used, and suddenly I'm less excited. Personally, I would have liked to have seen more aggressive, jolting cuts of music. The program felt a bit monochromatic to me, and to me it only really gained steam in the last 30 seconds or so. (That final split-leg lift! And yes, I noticed the leg line. The speed mitigated some of the line issues, to my mind.) I disagree with the CBC commentators who cited "lack of connection" as an area of concern. And to that end, I also disagree with Kurt Browning's statement that Charlie White needs to slick his hair back to create more of the tango feel. In terms of aesthetics, I think the wild blond mop *is* its own POV (as much as hair can be a statement on its own... Gwendal Peizerat might be another example) and rather emblematic of the ferocity of Marlie's skating. They are not measured; this is full-steam ahead, all-cylinders firing, and his look sells that type of performance in my mind.
To me, the main issue was the construction of the program. The program felt so busy I didn't really have as much time as I would have liked to appreciate the performance of the tango rather than marvel at the technical wizardry. Still, it's early in the season, and this was an impressive debut. I'm not going to deny its brilliance and that of their skating.
Second Place: Weaver/Poje - Third in FD (82.88), Second Overall (141.57)
Amber and Andrew skated to "Moulin Rouge" with Amber looking decidedly less Corwinish in the FD than the SD. Andrew loses hold of his skate during the twizzles, and that pretty much characterizes the entirety of the performance. They lack the technical skills of a Marlie to push through all these elements without it looking rushed and like they're teetering on the edge at most times. It was a fun, if wild, ride. A nice safety bar might prevent me feeling like I'm about to fall off the rollercoaster the next time Andrew spins Amber upside down.
Third Place: Shibutani/Shibutani - Second in FD (83.25), Third Overall (136.93)
I will admit it took a second or so to adjust to the Shibs' babyfaces, which inadvertently makes me feel like I'm watching one of those junior dance segments on "Dancing With The Stars." Dancing to a medley of Nat King Cole-sung standards, they flit across the ice with a gentle ease that would make Carrie Ann Inaba gush and Bruno Tonioli orgasm with hyperbole right out of his chair. And even Len Goodman might feel less compelled to play the role of contrarian in what was an otherwise charming performance. 7-7-6?
Fourth Place: Ilinykh/Katsalapov - Fourth in FD (78.16), Fourth Overall (135.05)
The ballerina and her ex-boyfriend skate to Minkus' "Don Quixote," and Elena certainly came dressed for the part. Interestingly, here's where I would apply Browning's slicked-back hair comment. Elena is so clearly the dramatic diva, Nikita would be well advised to follow suit. Can you have too much drama with a skater like Elena as your partner? Impossible. I found this program to be a step back from last season's captivating "Schindler's List" program. You're treading dangerous waters when the most balletic thing about the performance is Elena's tutu.
Final Results