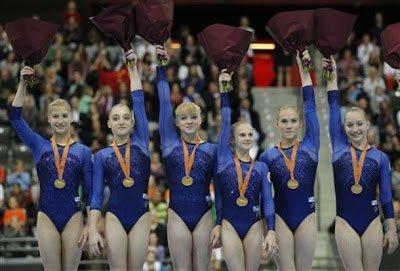 The 6-3-3 final is the ultimate test of competitive readiness and mental fortitude. For many of these girls, making the world team is quite an achievement. While it may be their first World Championships, many of these gymnasts are experienced competitors who aren't new to international competition. Tatiana Nabieva and Aliya Mustafina are finally members of the Russian World Team, but they have been groomed for years.

There are competitions and then there are finals where medals are on the line. The 6-3-3 Team Final is similar to All-Around Finals and Event Finals in that those who wish to win gold medals need to not only 'hit' their routines or stay on, but they need to find the cojones to go for every handstand, take their releases higher and go after stuck landings. While going after the extra amplitude is daunting, most gymnasts tend to make mistakes when they hold back. There are many different ways of describing this mindset, but it becomes apparent early on whether or not a gymnast can hack it under the bright lights.

The European gymnasts are lucky to have the European Championships to experience a pressure situation similar to World Team Finals. Many other teams are not afforded the same opportunities for such experience. The Pac Rim Championships just don't cut it when Team USA knows that they deserve to swim home from Melbourne if they make enough errors to allow another team to take the title. In reality, this creates a culture where mistakes are not and cannot be readily forgiven. The National Team Coaches and Coordinators have a job when selecting teams and it involves making and breaking dreams. The decisions are harsh but necessary. If mistakes are forgiven, it creates a situation like Team Australia where a girl like Emily Little or Lauren Mitchell can afford to make mistakes because they know they will be given another opportunity due to a lack of depth. The level of intensity in training, competitions and selection camps change when failure is literally not an option. (Unless they are okay with finishing in sixth place.)

Mattie Larson's Olympic Dream ended today. It isn't a dramatic statement, it is just how the system operates. Deferring until 2012 was risky given comeback attempts being made and juniors on the rise, but Mattie is not a vital asset and is ultimately replaceable. Martha Karolyi has long appreciated Mattie's international look and Russian/Bulgarian coaching, but she has been wary of her injuries and competitive mettle. The European Tours provide Martha to analyze how the American girls handle being away from home for multiple weeks, how they train and how they compete. Martha analyzes everything and noted that Mattie watered down routines, was beyond shaky on balance beam and made unnecessary errors on her best event (floor).

The difference between champions and talented elites other comes down to the ability to handle pressure. While Mattie is a charismatic performer and one of the most popular gymnasts around, she has not proven herself to be able to perform at a level that is necessary to win Team or Individual gold medals at international competitions. While some of her shakiness is often nerves and tension, Mattie displayed great mental weakness by bombing her best event at Worlds. A favorite for floor finals entering the meet, Mattie could've made a strong case for herself for 2012 had she brought home an individual medal. Instead, Mattie struggled and botches three out of her four tumbling passes at Worlds. These were not mere issues with a skill, they were mental lapses that simply can't happen. Fight or flight baby. Unfortunately, Mattie will not be forgiven.

It has been a while since Martha excommunicated a gymnast. One notable example was Hollie Vise. When she finally became a senior, Hollie's body and mindset began changing. Martha questioned her focus and commitment. Falling immediately after forgetting to put on her number was unforgivable in Martha's eyes. Hollie's own personal coaches turned their attention elsewhere following Anaheim because they knew it was over. Hollie subsequently won a World Title, but it didn't matter because she tied with another American for the win and the team was already incredibly deep on the apparatus.

Many will want to draw comparisons between Mattie and Alicia Sacramone. Ms, Alicia was once in a bit of a pickle when Martha announced that she was "through with her" after she fell at 2004 Nationals. After accepting an invitation to a World Cup event, Alicia earned herself an unlikely spot at the World Cup Finals, where she earned a gold medal and more importantly, respect in the eyes of Martha Karolyi. By the time Alicia reached the 2008 Olympics, she had only missed one routine of the twenty she had competed at World Championships. She was a proven medal winner and attacked her routines with the intensity of an individual event winner. 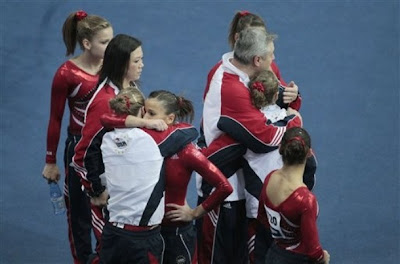 The 6-3-3 situation has a way of exposing a gymnast's legitimacy. It was not shocking that Nabieva or Huang Qiushaung made major errors. Both have been prone the the headcase label. Both can be excellent or a bit of a mess. In Mattie's case, she is very good on floor but average on the other apparatus. Another telling sign of Mattie's competitive mettle is that she did not take advantage of Bross' injury and win the All-Around at either of the two world selection camps. Frankly, it proves that she does not have the ability to capitalize on the mistakes and misfortunes of others. Gymnasts like Lavinia Milosovici and Gina Gogean made careers out of capitalizing on others' mistakes.

Martha Karolyi did not hide the fact that Mattie lacked mental toughness when questioned by the press after the meet. There was no sugarcoating. While many will whine that these girls are only teenagers, it is important to remember that these are the fiercest competitors in the World. If they were male and football players, (or just Russian), it would be acceptable to speak frankly and openly about such matters. Just ask Tony Romo.

On the flip side, Aly Raisman proved Martha right. She is not popular among hardcore fans by any stretch of the imagination, but Martha intuitively chose and groomed her over the last 18 months. Many emotional fans will try to excuse Mattie's lapses this week by saying that two tenths could've been made up anywhere. It is true, but those errors were often incredible saves made by other athletes. Alicia Sacramone missed a foot on beam but willed herself to stay on. Raisman and Bross proved just how tough they actually are.

Rebecca Bross is one fierce fugly gymnast. Mommy Dearest called her "awkward" but that little thing was injured and busted out full difficulty and hit. Bottom line, Rebecca cemented her status as a backbone of the American Team. Alicia and Aly are also included in that category.


As we look at Martha's former team, it is important to note that Belu is creating a new army of soldiers. They may have just missed the podium, but Porgras, Chelaru, Haidu and Izbasa delivered. The core of another strong team is building. 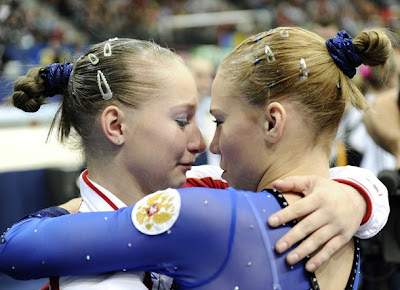 For Russia, even Elfi didn't hide the fact that Ksenia Semenova's gymnastics is incredibly uninspired. We will not see her on another team. Nabieva's chances are slim once the juniors emerge.

For China, they "Chinesed" it like good 'ol Yang Bo. Shame.


A final thought: Why is it acceptable for Russians to be blunt divas but not Americans? Screw political correctness. I want to be part of any press conference where the rookie team star calls out the mistakes of her countrywomen. Fierce Aliya Mustafina, fierce May you go on to win many individual titles this week.


One interesting note about Team Finals is that the top qualifier to each final (aside from floor) posted the highest tally in that event. Mustafina leads AA and VT, He Kexin leads UB, Porgras leads BB, and Afanasyeva and Mustafina continue to duke out 1-2 on FX.
Posted by OlympicEffect at 8:02 PM