The Power Behind The Throne 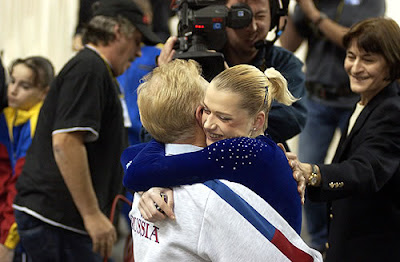 They were always an intriguing pair: the leggy Russian diva with a penchant for the unconventional and the overemotional – a sharp contrast to the measured calm and unrelenting stoicism of her coach. Together, they created magic for over a decade.

You couldn’t have paid John Tesh to voice a more compelling narrative.

The diva in question, Svetlana Khorkina, is remembered for her more-than-a-decade-long reign as queen of gymnastics. But Khorkina’s success was due in no small part to her lifelong coach, Boris Pilkin, who fashioned routines for his pupil that capitalized on her unusually tall figure (nearly 5'5''). Pilkin, the guiding force and power behind the throne, died Thursday at the age of 82.

"[Pilkin] is the one who gives me ideas first,” Khorkina told Reuters in 2003. “The programs are not easy, and I have to work hard to make it happen,” she said.

And together, they did.

As a young gymnast, several coaches suggested she take up rhythmic gymnastics instead, but "her longtime coach stuck by her, she says, when everybody gave up on her," recalled Tim Daggett while commentating on the Uneven Bars finals at the 2000 Olympics, during which Khorkina captured her second consecutive Olympic title on that event.

Under Pilkin's tutelage, originality was a necessity, innovation an artform. And during their time together, Khorkina amassed a legendary collection of accolades that includes: 3 World All-Around Titles, 7 Olympic medals (including two golds), and 20 world medals.

"Her coach, Boris Pilkin, had to figure out new ways to bring difficulty," Daggett said during the 1996 Olympics. "She has a longer body... so she does some unconventional things that work very well."

From what the cameras showed of him, Pilkin was never quite the demonstrative figure that his star athlete was. It didn’t matter; her repertoire of moves spoke volumes for him.

Khorkina was quoted in International Gymnast as saying "He will remain forever in my memory and my heart, my friend in battle," she said. "He did a lot for Russian sport, and for me personally. If not for Boris, I don't know what my life and sports career would have been like."

If the legacy Khorkina left in gymnastics is indelible, then surely Pilkin’s imprint on that legacy is undeniable. 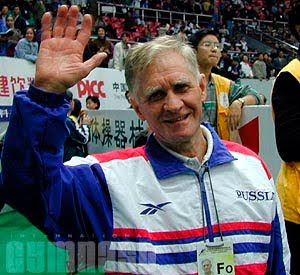 Posted by OlympicEffect at 8:18 PM